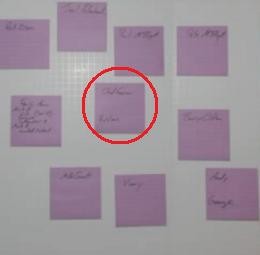 That is that Ohlsen kept a bizarre stockpile of goods at his home including a smoke grenade, body bag, police outfits and an "enemies list" containing the names of yours truly and former RFT staff-writer Kristen Hinman.

Here's what Hinman reported back in '09 when she got a sneak peak at the photographic evidence that Fox 2 has now shared with the world.

During a search of Ohlsen's North Thirteenth Street loft on December 19, 2008, as investigators were busy collecting evidence that would build the bank-fraud and weapons cases against him, they found an aerial photograph that intrigued them.

Three days later, investigators went back into Ohlsen's bachelor pad and confiscated an array of intriguing items, including a smoke grenade -- though, apparently, no smoking gun.

Among the pieces seized was a large poster-board with my colleague Chad Garrison's and my name attached to it. The poster-board outlines Ohlsen's, you could say, shit list.

Ohlsen apparently stuck post-it notes bearing the names of his enemies to the three-panel-wide board. At the top are the names of his ex-wife, her attorney in their divorce case, and Joel Hollenbeck, an acquaintance with whom Ohlsen has a longstanding beef.

Garrison and I made it onto the second row of post-its, presumably for two short stories ("Phantom Punch" and "Seeing Red: Partners battle over a Wash. Ave. eatery's ownership") in which he figured and which we wrote last year.

Federal investigators seized the poster-board, along with at least one other. The latter poster-board bore a type-written time-line of events in Ohlsen's extra-marital affair and divorce from his wife. It also included a Microsoft Virtual Earth aerial photograph of Hollenbeck's house.

Here, then, is the Fox 2's story from Wednesday that showcases the evidence.

Ohlsen first made big news, as you'll recall, when his work as a political consultant led to the downfall of state senator Jeff Smith in the summer of 2009.