High-Flying Luchadores in the Lou! 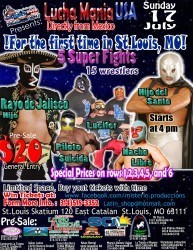 This weekend, for the first time in St. Louis, Misterio Productions is hosting an authentic Mexican lucha libre tournament.

The production company, which has been instrumental in bringing music and general awesomeness to Cherokee Street's festivals (including its legendary Cinco de Mayo celebration) has been working for two years to bring Mexican masked high-flying wrestlers to the city. Starting Sunday at 4 p.m., plenty of acrobatic grapplers will be on hand for a four-hour, five-match extravaganza.

Tomas Pedro, who founded Misterio Productions in 2006, gave us the skinny on the distinctive style, with interpretation help from Minerva Lopez, of the Cherokee Street Latino Business Owners Association and all sorts of other great Cherokee Street stuff.

In Mexico, lucha libre happens every weekend, and it's packed, Pedro says: "It's everyone, your grandmother, your mom." He's expecting about a thousand people at the St. Louis Skatium, and has been advertising through fliers, on Facebook and Spanish-language radio. They're expecting mostly Mexicans, but also "Central Americans and an occasional gringo."

The audience will come, he says, to be reminded of their homelands. But for some younger Mexican-Americans born here, it'll be their first time: they may have been hearing about lucha libre from their parents for years, and this will be their first chance to see it live.

The high-flying wrestling style is distinguished easily from the commercial WWE that so many Americans have grown up on. It's more acrobatic, says Pedro.

And the masks the wrestlers wear are an integral part of their personas.

"The wrestlers lead ordinary lives," Pedro says. "The masks are identity shields. It's also part of the mystique."

Wrestlers will put their masks on the line in matches, with the winner taking the loser's mask as a trophy -- not to be worn, but to be kept as booty.

"Some go to bed with their masks on," Lopez, who sells masks at her shop on Cherokee. "One had a baby [at a match] and the baby had a mask on. Once you find out who they are, they lose the mystique."

One big name coming Sunday is Hijo Del Santo. (He's in the gold mask in the poster.) His name means Son of Santo, and Santo is a huge deal in Mexico.

"Santo is Mexico's most iconic wrestler," Lopez says. "There's not a kid in Mexico who doesn't know who this guy is."

And maybe after Sunday, there won't be a kid in St. Louis who doesn't know who Hijo del Santo is. Check it out. Tickets are $20, and the Skatium is at 120 East Catalan. Stop by most any Latin-owned business on Cherokee to get tickets or get pointed in the right direction, or buy them at the door -- if there are any left.