Got a Plan for Pruitt-Igoe? St. Louis Preservationists Want to Hear It

Since 1977, when the last remnants of the Pruitt-Igoe Housing Project were destroyed, most of the 57-acre site at the corner of Cass and North Jefferson avenues has lain dormant. Some developers, notably Paul McKee of NorthSide Development, have said they have plans for the area, but nobody has done anything, except for the St. Louis Public Schools, which built the Gateway Schools complex.

The remaining 33 acres are turning into a sort of urban forest and, thanks to the recent documentary The Pruitt-Igoe Myth, has become the subject of curiosity for urban explorers. (If you're interested, by the way, the doc is screening Sunday night, July 17, at Off Broadway.)

What to do? This may not be prime real estate, but it is less than two miles from downtown.

A newly-formed nonprofit called Pruitt-Igoe Now has just launched a design competition for plans to develop the area. That doesn't mean any of the plans will actually be implemented, but, as Michael Allen, the architectural historian behind the Preservation Research Office and one of the masterminds of Pruitt-Igoe Now, points out to the Post-Dispatch, this is really about starting a conversation. 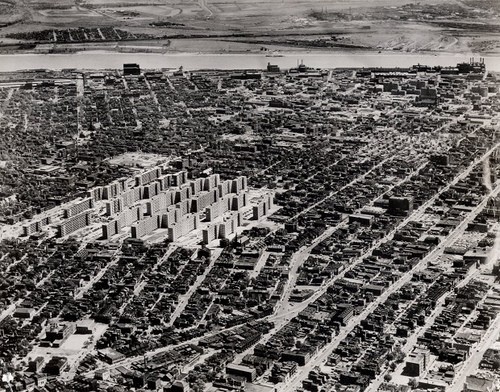 The competition has the blessing of Alderman April Ford-Griffin, who serves on the advisory committee, and former Pruitt-Igoe and current neighborhood residents have been recruited, along with architects and building experts, as judges.

It does not, however, have the blessing of McKee, or the city-run Land Clearance for Redevelopment Authority, which actually owns the site.

Rodney Crim, president of the St. Louis Development Corp., which includes the Land Clearance for Redevelopment Authority, told the P-D that there are environmental concerns about the area, namely pollutants buried underground. Plus, he said, the city has, for a while, considered the site a good place for an employment center.

Nonetheless, the competition will continue as planned. Proposals are due on March 16, 2012, the fortieth anniversary of the beginning of the destruction of Pruitt-Igoe, and the winners will be announced next summer.

In the meantime, others have announced proposals for the Pruitt-Igoe site, including Juan William Chávez, who has suggested a bee sanctuary.