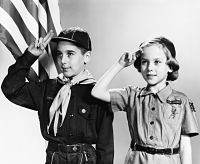 You can earn a Boy Scout merit badge in fly fishing, in stamp collecting and in something called "pulp and paper." You can even earn one in journalism. But it wasn't until now that the Boy Scouts organization finally made chess a merit badge option.

And, as it turns out, chess-loving Boy Scouts have Rex and Jeanne Sinquefield to thank for that.

The movement to add chess to the list of badges Boy Scouts can earn has been in progress for years, but was amped up about one year ago when the St. Louis couple -- known for both their philanthropy and Rex's political conservatism -- added their weight to the argument.

"Chess builds an incredible amount of live skills in those who play it, and I've been trying to get it accepted for a while now," says Jeanne Sinquefield, who previously led a troop of more than 50 scouts. "It's a great way for these children to develop those skills and to learn more about chess."

In St. Louis, the Sinquefields founded the stunning Chess Club and Scholastic Center in the expensive Central West End, which is today the hub of American chess and the center of scholastic efforts to teach it in St. Louis schools. The ability to earn a merit badge is another way to promote the game to children when they're young. And it needs only to beat fly fishing, the list's least popular badge, in order to avoid earning that title itself. (Previously discontinued badges have included taxidermy and something called "nut culture." Umm.)

Right now, Cub Scouts and Webelos can already earn pins and belt loops for experience with chess, but the badges for their older friends will hit the shelves in late August. The chess community plans to host a launch party in the Scouts' honor September 10, and the party being planned sounds aggressively fun: The hosts have invited local Boy Scouts to play a giant game of human chess and are currently trying to guarantee the participation of a NASA astronaut who is both an Eagle Scout and has played chess in space. (Chess. In. Space.)

"Our goal is always to teach people more about the game, and we hope this is a fun way for them to do so," Jeanne Sinquefield says. "It means a lot to us."