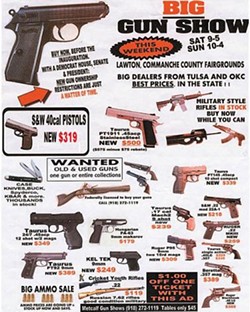 Here's what happened between 7 p.m. and 9 p.m. in and around St. Louis last night.


So, what's the solution to this senseless and horrific violence? The answer is clear. More guns!!

In the case of the two girls who accidentally shot themselves yesterday: If only a few more handguns had been lying around their homes, perhaps they would have chosen a weapon to play with that was more difficult to engage. And maybe, just maybe, they'd be okay today.

And the boy shot while playing basketball? He should have been armed himself! Last week Missouri governor Jay Nixon signed into law a bill backed by the NRA that lowers the age for concealed-carry to 21. Clearly, that's not low enough.

If National Rifle Association really wants to protect American families (as it claims), it should push to eliminate any and all age restrictions concerning guns. If only the three-year-old killed yesterday had been able to apply for a concealed-carry permit, she'd have been forced to take the gun training that could have saved her life.

The time is ripe, NRA. Seize the opportunity from last night's tragic shootings of children, and help us deliver the laxer gun laws that can make America a safer place!