Check out the Newest LGBT Corner of Cyberspace 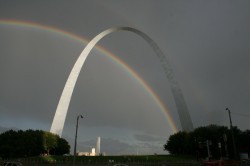 With social media like Facebook and Twitter taking over the world, your social life is probably all about your online connections these days. It's that very connectivity, though, that's making traditional blogs lose out.

As we reported back in May, the switch to social media as the preferred online connection led to the demise of GayStLouis.com, an online hub for lesbian, gay, bisexual and transgender news and events.Tony Bossaller, who ran the site since 1998, told us he hoped someone would pick up the site where he left off.

And someone has, integrating the DIY, crowd-sourcing ethos of social networking into what will hopefully become a central location for all things LGBT in St. Louis.

"We're making it more social," says Eddie Gomez, who took the reigns from Bossaller with a site that went live about a week and a half ago. Unfortunately, he couldn't afford to take over the GayStLouis.com domain, but hopefully will be able to buy it once it comes up for sale again. For now, check out www.whatsoutandabout.com or www.watchalookinfor.com.

"Our site allows the user to create the events themselves," Gomez says. "When you're adding an event, there's a place for you to put in your link to Facebook events and your Twitter account."

Businesses can list themselves for free, and anyone can post an event for free for 30 days. It's $20 for a 60-day event listing, or $55 to be a featured event, meaning marquee billing on the site.

Gomez and his team of volunteers are working to get geomapping functional on the site, where events and businesses will show up on Google maps. Users will also be able to search events or businesses by ZIP code. And you can create a Facebook event page right from the site.

"You look on Facebook and you're like 'Where are all the gay events?'" Gomez says. Moving to St. Louis fairly recently, he found that it took work to find the community -- it was there and thriving, but not always easy for a newbie to suss out.

"Our goal is to take the scattered community out there and bring them back together," says Gomez. And Bossaller did a great job of that, he's quick to point out.

"He did a great job building a bridge for our community and everybody needs to applaud him," Gomez says. "He had a really good history of people checking the site out."

And, hopefully, www.whatsoutandabout.com and www.watchalookinfor.com (both URLs get you to the same place) will, too. After all, social media only works when plenty of people do it!