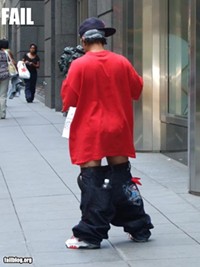 The law passed by a 3-2 vote and makes it illegal for people to wear their pants more than three to four inches below the waistline of their underwear. Those found guilty of the offense would be subject to a $100 fine. Get caught sagging more than once, and you could be fined $300 and forced to do community service.

Council members in favor of the ban say that their constituents demanded the legislation and associated saggy pants with gang activity. In 2007, the city of Pine Lawn in north St. Louis County passed a similar ban.

H/T Belleville News-Democrat, which has all the lowdown on Collinville's saggy pants debate.