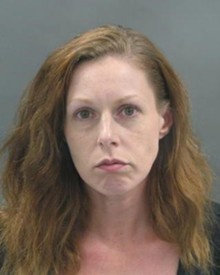 In July 2010, Angela Fletcher and her boyfriend, Nicholas Barrale, obtained orders of protection --  barring a St. Louis woman from harassing them via text message. The woman had allegedly sent Barrale hundreds of threatening messages.

But the text messages kept coming, or so Fletcher told the police. At that point, they arrested the alleged harasser for violating the order of protection.

Only problem? As the police eventually discovered, it was Fletcher who'd been sending the nasty messages all along. She was only pretending to be the other woman.

The St. Louis Circuit Attorney's Office alleges that Fletcher sent her own boyfriend as many as 897 harassing text messages, apparently trying to frame another woman. And so in November -- four months after Fletcher's false statements and phony evidence sent her arch-enemy to the clink -- police arrested Fletcher.

On Thursday, a jury agreed with the prosecutors, finding Fletcher, a 36-year-old Dutchtown resident, guilty of three misdemeanor counts: harassment, making a false report and making a false declaration.

A spokeswoman for St. Louis Circuit Attorney Jennifer Joyce tells Daily RFT that the jury deadlocked on a sentence, so that will be decided by the judge in August. 'Til then, Fletcher's cooling her jets in jail, where (we're hoping) she doesn't have access to any mobile devices.

But here's the craziest part of this story:

That boyfriend who Fletcher has been found guilty of harassing with 897 texts?

Seriously, guys, what does it take these days? Eight hundred ninety-seven harassing text messages aren't enough to suggest you might want to move on?