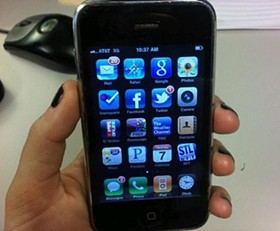 Next time you get black-out wasted on Goldschlager and wake up behind a strip mall, you might have no idea where you are. But your iPhone does.

In fact, it's been tracking -- and recording -- your spatial location since the moment you turned it on.

That's a big problem to certain Missourians, who (like people in other states) are now pursuing a class action lawsuit against Apple Inc.


According to the suit, filed in May by attorney Christian G. Montroy on behalf of plaintiffs Erin Snyder, Zachary Richardet and others, the geographic tracking:

places users at serious risk of privacy invasions, including stalking. Moreover, this secretly-gathered private information may be subpoenaed and become public in the course of any litigation, including divorce proceedings.

(Um...maybe the horrific relationship choices these plaintiffs have made deserve a little attention too. After the iPhone thing, of course.)

The Eastern District of Missouri is not the only venue in which such a class-action lawsuit has been brought against Apple for geo-tracking. Ever since the big Wall Street Journal investigation last December, suits have sprung up in other places, such as Puerto Rico and Florida. See the local complaint below:
MissouriansvAppleInc