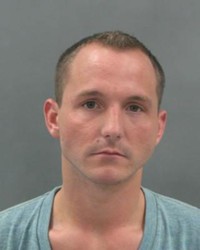 John Foster Courtney, a popular rugby player and 29-year-old south-city resident, lost his life July 4 -- 23 hours after he was struck by a driver speeding through Manchester Road in the popular Grove district.

Witnesses told police that the driver who hit Courtney, Justin Kramarczyk, had been drinking. (Kramarczyk, who fled the scene in his Hyundai, has been charged with one felony count of leaving the scene of an accident.) Witnesses also said he was "driving fast," according to the police investigator's probable cause statement.

As Courtney's death shows, the combination of bars (providing both alcohol and plenty of foot traffic to a place like the Grove) and fast driving (on arterial streets like Manchester) can be deadly to pedestrians.

And the police say they're taking it seriously. Starting today, they're pledging an increased presence in the Grove. As the department wrote in a prepared statement,

Starting tonight, Traffic Enforcement Officers will have an increased presence in The Grove Neighborhood along Manchester especially during the evening/early morning hours when there is the most activity. The Police Department will also be working with local elected officials and the City's Streets Department to discuss traffic signals along Manchester and will determine if any changes need to be made regarding the stop lights. The Police Department also hopes to meet with bar and restaurant owners in the area to see how they can get involved in making our community safer.

And it's not all stick and no carrot. As Kara Bowlin, the spokeswoman for Mayor Francis Slay explains, the city has actually been working to encourage better behavior on the Grove's stretch of Manchester even before Courtney's tragic death.

As she explains, the city has been partnering with the Missouri Department of Transportation (which is actually responsible for that stretch of Manchester) on a project involving precisely that stretch of roadway.

The "Great Streets" initiative has been focused on improving Manchester from Kingshighway to (roughly) Vandeventer, bringing wider sidewalks, lighting and "street furniture." As part of the iniative, Bowlin adds, that stretch of Manchester is going on a "lane diet" -- reducing the number of through lanes on the street.

"Right now," she  explains, "everything is finished but the restriping -- and when the road is restriped, it will bring it down to one lane going in each direction and one turn lane, with parallel parking available on both sides of the street."  The restriping is expected to finish up within the next five days.

That said, as Bowlin points out, there's nothing anyone can do -- the street department or the cops -- if people insist on behaving badly. No amount of traffic devices or "street furniture" can stop a driver who's intent on driving drunk, or leaving a victim behind while he heads home to bed.

"No amount of streetscape or design will eliminate accidents when people are being reckless or irresponsible," she says.

Police and prosecutors are continuing to investigate the case against Kramarcyzk; it will be interesting to see if additional charges are filed as they continue.

Courtney was from Memphis, Missouri. We're hoping to get information about memorial arrangements; if anyone knows more and would like to fill us in, just let us know in the comment section.