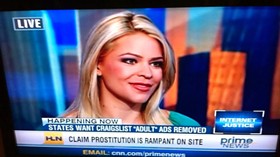 Craigslist was under fire for the racy ads in its "Adult Services" section, which critics claimed weren't properly screened to block ads from underage girls and victims of sex trafficking. Lyon wanted to know: What was the site doing to protect those girls? The questions left Newmark "speechless," as Lyon later boasted on her personal website.

Indeed, within weeks, Craigslist shut down its adult section. Then, Lyon -- who actually grew up in St. Louis -- reported that a different site was "filling the vacuum": Backpage.com, which is owned by Riverfront Times' parent company, Village Voice Media.

The papers of Village Voice Media recently launched an investigative series, "The Truth About Sex Trafficking." The first installment, last week, was "an exposé on the shoddy math that fuels the outrage at underage sex trafficking."

This week, Village Voice Editor Tony Ortega calls Lyon on the carpet for, among other things, misrepresenting Backpage's response to her questions and raising money for her sources.

As for Lyon's local roots: She graduated from Parkway Central High School in 2001, then studied journalism at Mizzou.

Turns out she's actually been reporting on sex-related crimes since college: She won awards at Mizzou for "Battered Justice," a three-part series on the Missouri judicial system's treatment of abused women.

Lyon's series was one part of a bigger, statewide effort to get clemency for women who had murdered abusive husbands, says Colleen Coble of the Missouri Coalition Against Domestic and Sexual Violence.

Lyon's series, according to Coble, was just one among several reports on the issue at the time, but "certainly was a messenger to many people who were unaware of these women's lives and how they were treated through criminal courts."

The rest of Lyon's bio, which involves stints in Arizona, Guatemala and Florida, can be found here.