Sarah Steelman Does Some Fuzzy Math 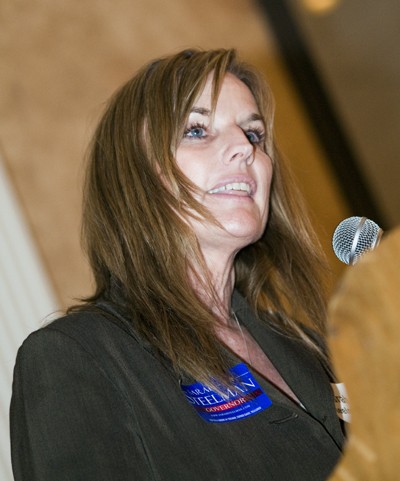 Funny story in yesterday's Roll Call about Sarah Steelman, the Republican trying to take on Senator Claire McCaskill -- and, of course, push back Todd "Liberals Hate God" Akin, who would also like McCaskill's seat.

Steelman has had to push back against allegations that she's more a pretty face than a competent politician. (Conservative KMOX host Mark Reardon blasted her after an on-air interview, saying she "isn't exactly the sharpest knife in the drawer," which you might get away with it if you're a dullard like Akin, but not if you're a good-lookin' blonde -- blondes facing endless stereotyping about their alleged ditziness and all.)

And the mistake her campaign made in a recent mailing is definitely not going to help.
The Roll Call story's hidden behind a subscription-only site, though someone was kind enough to send us the text. In it, the D.C.-based paper explains that Steelman sent out a campaign solicitation via email, begging for help to take down the once-high-flying McCaskill.

The only problem is the math mistake they made in doing so.

"I need 1000 friends to contribute $100 each to raise $10,000 by midnight [Thursday]. That will send a strong message to McCaskill to STOP THE MADNESS. I would greatly appreciate your help," the email said.

"It was a typo," Sam Steelman, the campaign manager and oldest son of the candidate, tells HOH. Apparently Sam meant to ask 1,000 people to donate $10 each, but added an extra zero by mistake. Oopsie daisy!

So, apparently Republican voters have a clear-cut choice in the primary: There's the guy who assumes only people with his political beliefs are capable of believing in God, and there's the gal whose campaign can't add. Makes us wonder whether Claire McCaskill's private plane is such a game changer after all.