Gone with the Wind, Wizard of Oz Materials Not Subject to Copyright, Appeals Court Finds 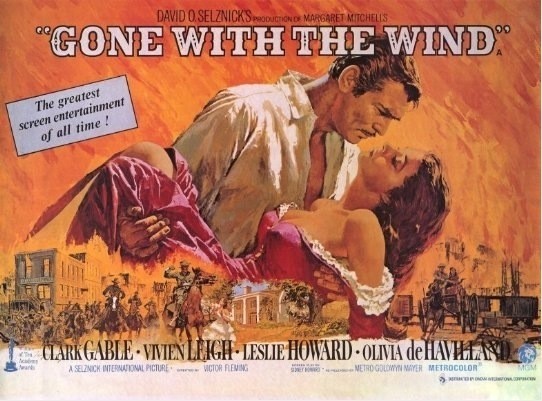 A long-fought suit in federal court here -- in which heavyweights Warner Brothers and Turner Entertainment Co. argued that movie nostalgia companies should be permanently barred from using promotional images related to Gone with the Wind and The Wizard of Oz -- has finally reached a verdict in the appellate court.

The winner? Well, it's all very complicated. In the 28-page opinion issued today, Warner Brothers did prevail on a bunch of points. But it wasn't a total victory by any means: In a reversal of the original U.S. District court ruling, the eighth circuit appellate judges found that reproductions from original movie posters and lobby cards for the two films are not subject to Warner Brothers' copyright -- making them OK for certain kinds of reproduction.
At issue in the much-blogged-about case are original publicity materials from the two 1939 films. Although the films are indisputably still under a Warner Brothers copyright (which that company owns after buying the rights from MGM), a bunch of lobby cards, movie posters and still photographs that promoted them are not.

Those materials don't rely on still images from the films, as the appeals court opinion notes. Instead, they were "created independently by still photographers and artists before or during production of the films." They were then distributed to movie theaters -- and subsquently made their way to nostalgia companies like A.V.E.L.A. and X One X Productions, which used them as a jumping-off point for a host of new merchandise, from action figures to lunch boxes.

And that's where the court's decision gets tricky. Ultimately, the appellate justices conclude that it's OK to use the publicity materials for things like T-shirts, music box lids, lunch boxes and playing cards. That's a reversal of the district court.

But the appeals court didn't give the movie nostalgia companies a total free pass; it agreed with the district court that it wasn't OK to use those materials for "composite works" -- e.g., a T-shirt featuring a publicity image of Judy Garland plus the phrase "There's no place like home" would actually violate Warner Brothers' copyright. That gets into stuff copyrighted via the movie.

They also found that it wasn't OK to turn the publicity still into three-dimensional objects, such as Dorothy water globes or Rhett Butler action figures.

"In depositions, the AVELA licensees who developed the action figures, figurines, water globes, and busts made no pretense that they were not guided by their knowledge of the films," the justices conclude. "Instead, they indicated that, while each three-dimensional design began with an image from the public domain photo stills and movie posters, the goal was to create a product recognizable as the film character." And that, apparently, is a step too far.

The case was originally filed in federal court here in 2006; expect to see more appeals and more legal wrangling before this thing is done.