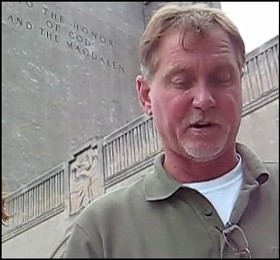 The Eastern District Court of Appeals ruled today that if a local Catholic priest with a history of sexually abusing children molests a young boy but does it solely off of church property, the Archdiocese of St. Louis can't be held legally responsible.

(The technical way to say it, for all you legal types, is that the Church can't be held liable for "intentional failure to supervise.")

Paul J. Alvino now lives in Mehlville, but he grew up in the St. Mary Magdalen parish in South City. Alvino claims that the late Fr. Thomas Cooper abused him during a trip out to the country back in 1971 -- an experience that Alvino says was erased from his memory, only to be recovered in a therapy session ten years ago.

(For the full background on this case, see our feature, "Sins of the Father.")
True, recovered memories are notoriously sketchy, but there's plenty of evidence suggesting Alvino is telling the truth: The local Church hierarchy exchanged letters back in the late '60s about how to handle "the problem of Father Cooper." Furthermore, Cooper had previously been sued by another man for very similar allegations, and settled out of court -- a matter which Alvino knew nothing about at the time he recovered his memory.

When Daily RFT called Alvino for his response to today's ruling, he hadn't yet heard about it and added that he was "shocked."

Sources who wish to remain anonymous because the litigation is pending say that the Church has offered financial assistance to Alvino which would cover his therapy. However, negotiations have not yet produced a settlement.

"This was never about the money for me," Alvino said today.  "More than anything I want my day in court, I was on a mission to expose the Archdiocese for what they've done."

Alvino said he hasn't spoken to his lawyer and doesn't know yet if he'll appeal to the Missouri Supreme Court.

The practical effect of the Court's decision, should it stand, would be that "the Archdiocese can have a known pedophile like Fr. Cooper, allow him to take children off campus, and if abuse happens off campus, they won't be liable for that."