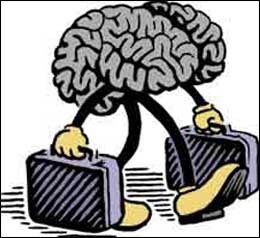 You've heard the stories. St. Louis is losing its most creative and entrepreneurial people to the likes of Chicago, New York and Austin. If only we were more like Silicon Valley -- the argument goes -- perhaps local boy Jack Dorsey would've founded Twitter in his hometown of St. Louis and not the Bay Area.

But how to stop the brain drain? Judy Sindecuse, a self-described "serial entrepreneur" and founder of the venture capital company Capital Innovators, thinks she has a possible solution. It's called StartUp St. Louis, a tech-company accelerator she's helping to start this fall that aims to launch 40 IT companies in St. Louis within the next four years.

"We've found that there are fantastic companies here that were dying on the vine because they'd taken the business as far as it could go before hitting a funding wall," Sindecuse tells Daily RFT. "We want to put that to an end to that by introducing these entrepreneurs to potential investors, while at the same time helping them get their business to the next level."

StartUp St. Louis is currently looking for five tech firms to participate in the first round of its program beginning in September. Each company will receive $50,000 in seed money and free office space for twelve weeks inside the Railway Exchange Building (the former Famous-Barr headquarters). During those twelve weeks of "bootcamp," StartUp St. Louis will provide the entrepreneurs with free technical, research, legal and accounting expertise from area mentors.

What's the catch? As noted, Capital Investors is a venture capital firm. It hopes StartUp St. Louis will allow it to invest early on in the next "big thing" in the tech biz.

"I'm managing a fund that needs to make money for its investors, and many of my investors are entrepreneurs themselves who have a real interest in helping others start a business," says Sindecuse, who's teamed up with the RCGA, the Partnership for Downtown St. Louis, the St. Louis Economic Development Corporation and the IT Entrepreneur Network (ITEN) of St. Louis in launching the program.

The ideal candidate for StartUp St. Louis will have a working prototype of his or her business (be it social media, software, hardware, etc.) even if it's not particularly effective at this time. That said, Sindecuse is encouraging any tech entrepreneur to apply for the program no matter how far along they are with their company. The one stipulation is that you have to be committed full-time to the endeavor and able to attend the twelve-week course.

Those interested in applying can do so at capitalinnovators.com. The deadline for applications for the inaugural session of StartUp St. Louis (beginning September 12) is July 15. A new round of five entrepreneurs will begin once that first session is complete.