Wash. U. Docs Find Underlying Cause of Ovarian Cancer 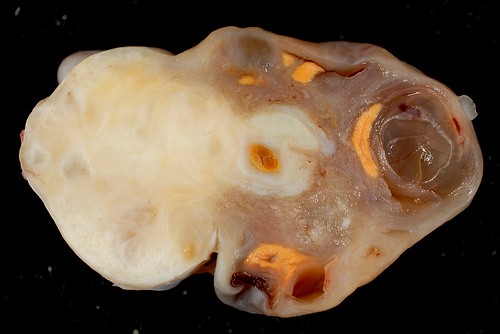 It's old news that cancer is caused by mutations in otherwise healthy cells. But where are those mutations? That's what the researchers at Washington University's Genome Institute have been trying to figure out. Earlier this year, a team sequenced DNA from breast cancer patients. This month another team has done the same for ovarian cancer, and just published their findings in the journal Nature.

"For the first time, we are able to take a close look at the genetic changes that underlie ovarian cancer," said Richard K. Wilson, PhD, director of Washington University's Genome Institute and a co-author of the Nature article. "We have compiled a short list of mutations that occur commonly in ovarian tumors as well as a much longer list of mutations that occur much less frequently.

Wilson and his researchers studied ovarian tumors in 500 patients with serous adenocarcinoma, the most common form of ovarian cancer. (It accounts for 85 percent of deaths.) They sequenced the protein-coding genes in 300 of the tumors and discovered that mutations in the gene TP53 are responsible for a staggering 96 percent of cases of serious adenocarcinoma.

Normally, TP53 produces a protein that prevents cancer from developing. The mutations cause the cancerous ovarian cells to proliferate.

The researchers discovered that patients with mutations in the BRCA1 and BRCA2 genes, normally associated with breast cancer, also have a greater risk of developing ovarian cancer. But, weirdly, when the researchers analyzed genetic patterns to see which patients had a better chance of survival, they found that patients with mutations in BRCA1 and BRCA2 had better odds.

In addition to looking for the most common rogue genes, the researchers also hunted down other gene mutations that could possibly be stopped by existing drugs; they found 68. Even better, they discovered that half the tumors might respond to drugs that exploit the genetic instability of the cancer cells and cause them to turn on themselves instead of healthy cells.