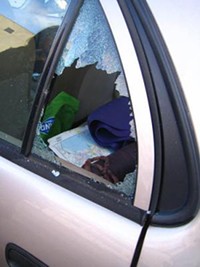 They charge you anywhere from $10 to $20 dollars to park your car in their lots for a few hours to catch a Cardinals game. You'd think the least they could do for that money is watch over your vehicle while it's there and make sure it's not vandalized.

Often, though, that isn't the case. Last Friday night thieves smashed into more than 60 vehicles parked in and around downtown during the Cardinals game. St. Louis police chief Dan Isom believes the smash-and-grab bandits are searching for handguns that might be hidden beneath the seat or in the glove box.

"I am angry and frustrated about what happened Friday night," said Slay in a release sent to the media today regarding Friday's break-ins. "It easily could have been prevented."

According to the mayor's office, several of the parking lots where the vandalism occurred did not have an attendant on duty at the time of the burglaries.

As a result, the mayor's office is demanding that commercial parking lots downtown provide an attendant to stick around for the entire time vehicles are parked in the lot. (That is, they can't just leave once the lot is full and they've collected all the moolah they're going to make that day.) Slay also wants restricted access to the lots to prevent thieves from entering the area.

The city counselors office is currently drafting measures that would put the rules in place within 30 days. Failure to comply with the rules could lead to the parking lots being shut down.

In the meantime, the city's Problem Properties division is planning to meet with the owners of 100 parking lots to specifically address nuisance issues on their properties.

Don't know about you, but Slay's policy seems to make sense to us. Of course, we'll see what happens once the car vandals turn their attention to mugging the parking lot attendants and stealing all those $10 and $20 bills collected at the gate.