Del Taco to Close Tomorrow; But Board Bill May Actually Save Building 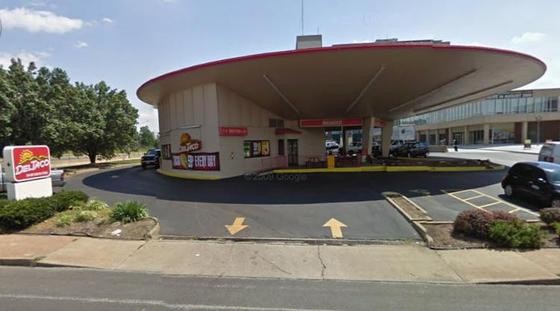 Alderwoman Marlene Davis wanted people to know that Board Bill #118 has nothing to do with any proposed demolition of the Del Taco building at South Grant and Forest Park. She repeated several times at today's Housing and Urban Development Aldermanic Committee Meeting that "this bill does not approve demolition."

This was a key point, of course, as more than fifty people showed up to protest the bill, which they-- and everybody else, including the mayor and Daily RFT-- believed would open the door for the endearingly quirky building's demolition. As the debate at the meeting made clear, though, the bill would simply provide a tax abatement to redevelop the property. Davis stressed that any proposal to demolish the building, which is in a historical district, would still have to go through the Preservation Board, despite rumors that that wouldn't be the case.

In fact, according to Davis, the bill may actually help prevent demolition. Here's why:

Del Taco has been sub-leasing the building to an independent operator. The branch didn't make much money and in December 2009, the operator filed for bankruptcy. He stopped paying his sub-lease after that. In December 2010, Del Taco decided not to renew their yearly lease with the building's owner Rick Yackey, opting for a month-to-month lease instead. Sometime between then and now, they decided that they would close down the branch. The Del Taco will be closing tomorrow and the property will be vacant starting July 1, according to Davis and confirmed by a company spokesperson.

For the past six months, Yackey said, he has been trying to find a new tenant for the building and it's been "extremely challenging."

"Candidly, I don't see us finding someone else" for that building, he said at the meeting. He believes that the building is not an appealing property for potential retailers because of a lack of parking and because the property is "not pedestrian friendly," among other things. He also said that he doesn't want another place "open until four in the morning," citing that neighbors have complained about crime taking place around the Del Taco late at night. So he wants to demolish the building because he doesn't think anybody would be interested in reusing it.

He can apply to have it demolished whether or not Board Bill #118 passes. The bill doesn't affect that process at all.

What the bill does is provide incentive for potential retailers, in the form of a tax abatement. Yes, the tax abatement could end up funding a demolition. But it also could be the carrot that draws a tenant to an otherwise (allegedly) unappealing property.

Look at it this way: if the bill doesn't pass, Yackey will be exactly where he started. He'll have a property that he doesn't think he can sell so he'll apply to have it demolished anyway, to try to make the property more appealing. He'll likely do this with or without the tax abatement. The "controversial" Board Bill #118, ironically, might play a role in saving the beloved flying saucer building.

From the start, Davis was surprised by the passion ignited by the bill. Over the course of the meeting, she declared multiple times that this bill is exactly like many others the committee has passed, including one earlier in the day involving City Hospital, which is also in a historical district.

Interestingly, Yackey and Davis appeared to have different visions for the redevelopment plan. While Davis constantly stressed that the building would only be demolished if no tenants stepped forward, Yackey was adamant in proclaiming that the property was undesirable and would likely need to be torn down. This incongruence makes sense, though. The two do not necessarily have the same interests (for instance, Yackey doesn't have to worry about public support/reelection). After the meeting, Davis said that she would ensure that every effort would be made to find a tenant willing to reuse the building.

Another issue brought up in the meeting was the process by which the building was added to the National Register of Historic Places in the first place. The Del Taco building was actually part of a number of adjacent properties that Yackey was able to place on the historic register in 2007 soon after he purchased them. That historic designation ended up saving him millions of dollars through historic tax credits.

So, as Alderman Scott Ogilvie pointed out, many people have a problem with the fact that Yackey got the money because he argued that the group of buildings possessed historical value and then now he's essentially arguing that one of those buildings isn't valuable enough to preserve and that he should get more money to redevelop it.

"If we demolished every building in the city that has had a bad operator, here in 2011, we would have zero buildings," said Ogilvie, who was backed up by a wave of applause from the audience.

While this matter brings up the question of whether Yackey is manipulating the process of historical preservation (and Yackey would rightly point to his track record of consistently preserving old buildings to defend his case), the answer might not really affect whether or not the flying saucer building will get demolished.

What does affect those chances? Well, the public furor and the media coverage that has accompanied it. Davis said that all this attention has dramatically increased the number of inquiries from potential tenants interested in reusing the building. The people have spoken and the world is listening.

Oh, and by the way, the bill passed the committee by a vote of 5-2 and will likely be voted on by the entire board July 8.