Attn: God-Hating Liberals, Todd Akin is Sorry to Have Offended You -- Sort Of 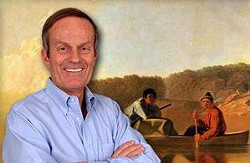 Four days after saying in a radio interview that "at the heart of Liberalism is a hatred of God," U.S. Congressman Todd Akin has offered up a half-hearted apology.

Akin made the controversial statement during an interview broadcast Friday with the conservative Christian group Family Research Council. When the story blew up on Monday, Akin refused to apologize.

At first Akin (R - Wildwood) let his press secretary handle the blowback coming from religious leaders and left-wing news outlets. When that failed to stop the criticism, Akin agreed to let conservative toady Mark Reardon softball him on KMOX. During that interview late Monday, Akin dug in while rephrasing his initial comment. Liberals don't necessarily hate God, they just don't want to ever discuss God. Or maybe they just want to knee-cap their creator. We couldn't determine which when Akin told Reardon:

"There's just such a historic pattern there that I think that it probably could've been clarified but no, I'm not going to apologize for what I see liberalism doing in trying to take God out," said Akin.

Well, that was Monday. By Tuesday, Akin had once again changed his tune. This time apologizing -- sort of -- for his initial remarks made last week.

"People, who know me and my family, know that we take our faith and beliefs very seriously," said Akin in a statement posted on his website. "As Christians, we would never question the sincerity of anyone's personal relationship with God. My statement during my radio interview was directed at the political movement, Liberalism not at any specific individual. If my statement gave a different impression, I offer my apologies."

[To be read in your sassiest, sarcastic voice:] Now if that isn't a convincing mea culpa, we don't know what is.