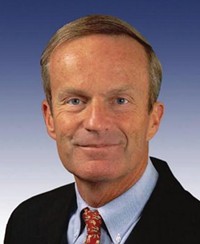 Now we know why.

Taylor has the uneviable task of cleaning up after his boss, and yesterday's mess was a whopper. It all began when media picked up on an interview Akin made Friday with the conservative Christian organization Family Research Council. In that interview, Akin was asked about NBC not airing the words "under God" during the Pledge of Allegiance played at the U.S. Open golf championship. Akin responded:


Well, I think NBC has a long record of being very liberal and at the heart of liberalism really is a hatred for God and a belief that government should replace God. And so they've had a long history of not being at all favorable toward many of things that have been such a blessing to our country.

The comment immediately drew fire from left-wing blogs and many religious leaders, who argued that Akins comments suggest he "knows very little about liberals" and "very little about God and his son Jesus."

Not surprisingly, Akin was nowhere to be found Monday to answer the criticism. That's the job for a professional spin doctor (a.k.a. press secretary). And, we must say, Taylor did as good a job as possible tamping out the flames. Here's what he told the media:

Personally, we're not buying Taylor's rhetoric. In fact, we're pretty sure that if Jesus were to descend to Earth in time for the 2012 general election, for which Akin is running for U.S. Senate, the son of God would register with the party that seeks to uphold the civil rights and dignity of all people -- not just those in the highest tax bracket. You know, the very people who Akin says "hates" him.

But, hey, at least Taylor earned his taxpayer salary yesterday. That ought to count for something. (View Taylor's salary here as well as the salaries of all congressional staffers.)