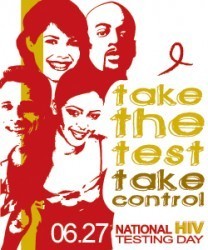 Today is National HIV Testing Day. Do you know your status? Are you sure?

According to the Centers for Disease Control and Prevention, there are more than a million people in the U.S. living with HIV. And even though we aren't being bombarded with prevention messages like we were when the disease was new, it's still a growing and insidious problem. Each year, 56,300 Americans become newly infected. One in five people with the disease don't even know they have it.

Back in May, James Walker Moon of the St. Louis Effort for AIDS told Daily RFT that his group had diagnosed 17 new cases of HIV in 2010 -- by May of 2011, they saw 19. And those numbers don't include other places in the city people are getting diagnosed. The disease is still here.

So if you don't know your status, head to any area Planned Parenthood location today -- they're offering free HIV testing today. Call (800) 320-PLAN to find the center closest to you. Can't make it today? Get in touch with Effort for AIDS. They do free testing every day, too, by appointment on Tuesday, Thursday and Friday -- you can just walk in on Mondays and Wednesdays.