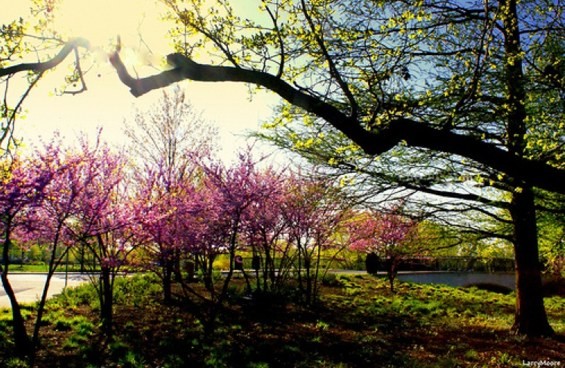 At 1,293 acres, the botanical Goliath that is Forest Park is hard not to love. If you profess not to love it, in fact, chances are you're a bad liar. Today marks the 135th anniversary of the park that everyone loves to love, making it 89 years older than the Gateway Arch and about 5,000 years younger than the pyramids (but who's counting?). It also marks the first Forest Park Forever Day, a newly created annual holiday that celebrates the park and the 25-year-old organization that protects it.

The holiday lands smack in a weekend of events that include an ice cream social (Saturday) and a 5K run (Sunday). The ultimate goal, however, is just to go to Forest Park and hopefully do something enjoyable. Currently, Forest Park Forever raises $3 million in donations each year to make that possible by protecting the $94 million investment that helped rebuild the park fifteen years ago.

"It's pretty simple," says Lesley Hoffarth, president and executive direct of the nonprofit. "We really just hope to make sure the park stays beautiful."

Although you could (accurately) call the group's 7,754 members tree huggers, that's not all they are. Because the city takes care of 107 other parks, this group came together 25 years ago to relieve the municipality of some of the work required to maintain the biggest of them all.

In 2008, when the majority of the park's restoration plans were finalized, the group's mission changed dramatically, with a shift from rebuilding the park to preserving it. Today, it offers visitors services and has spent eleven years working with teachers to use Forest Park as a teaching tool.

Although the park's to-do list is still ongoing -- signs, waterways and the occasional landscape still need to be rebuilt -- it's looking pretty good for a century-plus of life. And already this week, one entry on that list was crossed off when a group of 40 Marines and Boy Scouts spent an excessively hot Monday building a walking path through the park's Successional Forest.

The new path -- and the rest of the park's more than 1,000 acres -- will be available for walking, as usual, this weekend, albeit with more aplomb than they might have on other days. Mayor Francis Slay declared today a holiday on behalf of the organization and its inspiration, and the governor will raise the stakes by making that same claim for the entire state.

"I can't even imagine how many days the governor has proclaimed somebody's day," Hoffarth says. "It sounds cheesy, but it's a big deal for the park and the people who love it."