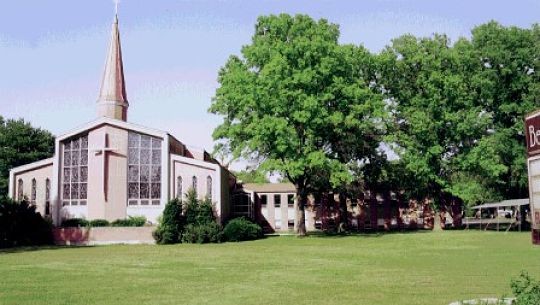 Bethel Providence Christian Church is a traditional brick building crowned by a steeple and fronted by a large cross. The interior of the chapel is equally traditional: Two tight rows of glossy wooden pews lead to a functional pulpit and altar, surrounded on all sides by tall stained glass windows that run the spectrum of colors the rest of the decoration avoids.

Until about a month ago, the church's philosophy was just as traditional. Split into two congregations like its two rows of central pews, Bethel Providence was originally both Bethel and Providence, a white church and a black one.

After a period of holding services inside a school building, the nondenominational Providence, with its black congregants, found residence inside the same building that housed Bethel, whose congregants were almost entirely white. Eventually the two came to share the same pastor, Providence's Reverend Charles G. Pennington, an African-American man who bluntly describes the church's eventual combination as both a symbol for the city's future and a small cure for its history of racial tension.

Although the two churches have held joint services once a month since last June, they officially merged only June 1. On that day, representatives of both congregations voted unanimously to become legally and symbolically incorporated. Bethel Providence's official unity service will find its 275 members together this Sunday at 3 p.m. in their joint home at 14700 New Halls Ferry Road.

"We want to send a message to St. Louis City, St. Louis County and the state of Missouri that it is possible for black and white people to come together," says Pennington, who became the pastor of both churches when Bethel's former pastor, Jamaican Lawrence Lansford, left the congregation in May 2010. "We were forced to come together in the workplace and in the schools, and we shop in the same places. In the churches, we have been separate still because the government can't intervene in the church.

"We believe that when we come together in the church, the last place we haven't come together, we're closing that last door."

The merger comes with several advantages: The united church is considerably more financially stable, and the generally older congregation of Bethel can benefit from the help of the much younger members of Providence.

But the move was not without detractors -- those who left rather than adapt to the racial diversity. The vote was unanimous, but that's only because not everyone chose to attend the meeting.

The merger gives the united church an almost 50-50 balance; the churches previously had 135 and 140 members. Each has given up part of its past. Providence left the African Methodist Episcopal Church in 2008; with the merger, Bethel broke away from the United Church of Christ to become nondenominational.

What remains is a hopeful combination, a focus on the hallmark tenets of Christianity, blended with an effort to aggressively challenge the divides of culture.

"A lot of times we look at issues as black problems and white problems that don't affect the opposite race, but we're wrong," Pennington says. "The only doctrine is unity. A lot of people in St. Louis may know a few black people, they may have some white people in their circle, but having a dear relationship with the other race as a brother or sister helps you see the world in a color other than black or white. And it's not just gray, either."