A New Entry in The History of Bad Officiating 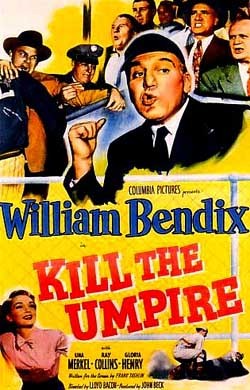 A funny thing came on the newsfeed on my sidebar the other night. I was just typing away, trying to get some work done, when I glanced over and the item at the top read, "Gladiator Blames Referee for Death."
There's something you don't see everyday, I thought to myself, and clicked on the item in question. What exactly I was expecting I'm not sure, but the story turned out to be much more interesting than I anticipated.
See, we all like to complain about the shoddy officiating in our sports, be it fouls not called on the home team in the NBA or a shape-shifting strike zone whenever Eduardo Sanchez comes in to pitch. (Seriously, I've never in my life seen a pitcher so consistently hurt by poor ball/strike calls. It must be something about the way he throws that makes it hard to pick the ball up or something.)

However, it turns out there was a dude who lived a couple thousand years ago who has much more reason to complain than any of us.
Michael Carter, a professor from Brock University in Canada, has apparently deciphered the inscription of one particular gladiator's tombstone, and it isn't the usual rigamarole of Requiem in Peace or Beloved Husband or Beloved Sex Mo-Sheen or possibly a dirty limerick of some sort. (Note: these are all things I want on my tombstone when I die, as well as an airbrushed mural of a monster truck with TEARIN' ASS written on the side in big lightning-bolt letters.) No, this particular tombstone is apparently telling the tale of the gladiator interred therein. Or, more specifically, the story of his untimely demise. Said gladiator went by the name of Diodorus, and his was surely an unhappy ending in the extreme.
Seems there was some officiating problems in the gladiator's final match. He had beaten down his opponent, who signaled his submission. However, the referee apparently failed to see the submission, and allowed the match to continue, at which point the fallen opponent resumed the fight and fatally stabbed Diodorus. Whether the error was an honest one or foul play was suspected is unknown. The ref's name was apparently Timus Donaghus, though, so draw your own conclusions.

​I would just like to point out, first of all, that I'm pretty sure this exact same thing happened to the British Bulldog at least once that I can recall, with the referee being distracted as his opponent hit him with a handy Intercontinental Belt. If I remember correctly, a match involving the late, great Macho Man Randy Savage actually involved the ref being knocked out, while Macho Man's opponent (might have been the Million Dollar Man, now that I think of it, but don't quote me on that), totally wailed on him with a steel chair. So personally, I don't think Diodorus has much of a leg to stand on.
What do you think the odds are that one of the Roman ringside announcers (they totally had those, right?), was yelling while this went down that the fanfare being blown on the trumpets was, in fact, the theme music of Demetrius, nemesis and eventual killer of Diodorus? I would lay money on it.
So just remember, the next time we see a hitter strike out on what is clearly an outside pitch or watch as the refs throw a pass interference flag on incidental contact, it could always be worse. Or better, I suppose, if you're into fatal stabbings. Which I assume most, if not all, of you are.

Baseball Apropos of Nothing