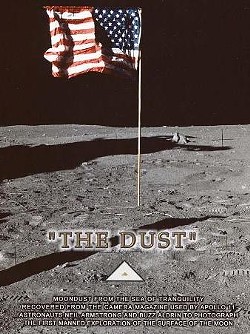 A speck of moon dust believed to have been smuggled out of NASA years ago has returned to the space agency after spending time in both Germany and St. Louis.

The dust was supposed to be placed up for auction this month in St. Louis when NASA authorities were made aware of the material. David Kols, president of the auction house Regency Superior, tells Daily RFT that prior to the June 10 auction he presented NASA with a catalog of items available for bid.

"They contacted me and said the dust couldn't be sold, and they wanted to confiscate it," says Kols. "In turn, I called the consignor, and she agreed to give it to NASA."

The U.S. Attorney's Office for Eastern Missouri confirms that Regency Superior and the consignor did no wrong and were not aware that the material had been stolen.

NASA contends that a former employee with access to a camera used on the 1969 Apollo 11 moon landing put the dust on a 1-inch piece of tape and smuggled it out of the space agency. In 2001, the employee allegedly sold the dust to a German collector. The tape holding the dust is then believed to have been cut up into smaller pieces and resold.

Kols, with Regency Superior, describes the moon dust he planned to sell this month as a "speck" with an estimated value of between $1,000 and $1,500. He also says that the stories he's heard differ as to whether the NASA employee stole the dust or was given it as a gift.

"Either way, it seems he was not to have sold the dust to other collectors," says Kols.

The woman who consigned it to Kols had received it from her late husband, who purchased it from the German collector (spaceflori.com) and was unaware of its dubious provenance.

Kols says that this is not the first time that NASA has contacted his auction house over an item up for bid. Regency Superior, with offices in St. Louis and Beverly Hills, has become one of the nation's biggest auctioneers of space memorabilia thanks to its initial business serving stamp collectors.

"There have been so many stamps issued with space themes that stamp collectors have grown to become the biggest collectors of space memorabilia," explains Kols.

Preliminary testing at the Johnson Space Center laboratory confirmed that the material is in all likelihood lunar, although it will take another two to three weeks to complete full testing.