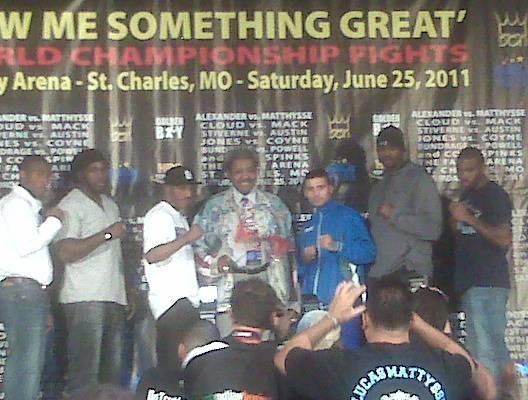 Don King is the kind of man who makes the room more exciting just by being there.

King stood on the floor of the Family Arena in St. Charles on Wednesday afternoon, chopping it up with the other bigwigs, waiting for the "Show Me Something Great... In the Show Me State!" press conference to start. Every eye in the arena was on him: his shorter-than-usual hair. His denim jacket with red, silver and blue sequins. The dozen or so mini-flags bundled in his arms. When Don King comes to town, people tend to take notice.

Indeed, there's no better man suited to corral the attention of the world to St. Charles this Saturday night than Mr. Only-In-America himself, a man who turns a simple press conference into a decadent showcase.

As the fighters on the card were introduced and found their seats at the podium, a custom-made rap song about Don King played on loop again and again and again.

When St. Charles native Ryan "Irish Outlaw" Coyne came out, he was preceded by men in kilts and bagpipes. And when King finally stepped to the microphone, he packed his winding monologues with words like "rectify" and "reveled" and "temerity." He talked about his love for the Cardinals, he quoted obscure Bible verses, and he said "St. Charles" dozens and dozens of times throughout the two-hour event -- kind of like the way a car salesman says the name of his customer every other sentence.

But say what you want about Don King. The man has brought a solid fight card to town. On the HBO Boxing After Dark undercard, the Tyson-esque (in fighting style, not personality) Tavoris Cloud (22-0, 18 KO) will defend his IBF light heavyweight against tough journeyman Yusaf Mack (29-3-2, 17KO). Meanwhile, 40-year-old six-foot-six-inch Ray Austin (28-5-4, 18 KO) hopes for one last chance at a belt in a heavyweight title eliminator against the hard-punching Bermane Stiverne (20-1-1, 19 KO), who will be on the fast track for a title shot against Wladimir Klitschko with an impressive showing.

The top two dark matches have drawn some buzz as well. Cornelius "K9" Bundrage (30-4, 18 KO) will defend his IBF Middleweight title for the first time against Sechew Powell (26-2, 15 KO). This will be particularly interesting since Bundrage's wife wrote an open letter to Powell last October, defending, among other things, her husband's faith in God and his attempts to set up a bout with a big-name fighter.

Bundrage didn't show up to the presser, giving Powell and his trainer the opportunity to call him "disrespectful." Also not a the presser: WBA cruiserweight champ Guillermo Jones, who had been slated to defend his title against Coyne (16-0, 6 KO) in the co-headliner. Jones suffered an injury in training (he slipped while exiting the ring) and had to pull out of the fight -- which obviously sucks for Coyne, since not only did he want the title shot, but his face is on all the posters and he now has to fight David McNemar (13-0, 10 KO), an unknown name with nothing to lose.

Coyne expressed his frustration through a string of fat jokes directed at Jones. Like:

"While I was out running, unfortunately my opponent was stumbling into Arby's."

"He'll get his. And I'm not talking about his fourth trip to the buffet line."

The main event, of course, should be awesome. Devon Alexander (21-1. 13 KO) has taken much criticism for the way his fight against Timothy Bradley ended. He got headbutted a few times, a gash opened up above his right eye, and in the tenth round, the ringside physician ended the fight after Alexander showed that he couldn't open the eye. It was an anti-climactic way for a young boxer to lose his undefeated record. (Some thought he used the gash as an excuse to escape Bradley's punishment, but that's between him and God.)

Alexander is at that precarious point in his career where a strong win can still put him right back into the mix for the junior welterweight crown, while a poor performance would throw him to the back of the line.

So at the press conference, Alexander wore a T-shirt with the word "Redemption" on it. He'll have a chance to prove his toughness against Lucas Matthysse (28-1, 26 KO), who might be the hardest hitting 140-pounder on the planet. The Argentinian's only loss came eight months ago, in a controversial (and razor-thin) split decision against Zab Judah. In Matthysse's only fight since, he knocked down DeMarcus Corley nine times in a dominating eight round TKO.

"I traveled thousands of kilometers to fight," he said through a translator. "I didn't come here to shake Don King's hand. I came here to knock out Devon Alexander."

The fighters will weigh-in Friday on North Main Street in St. Charles' historic district. The Alexander-Matthysse fight, the Cloud-Mack fight, and the Austin-Stiverne fight will be shown on HBO's Boxing After Dark this Saturday. But for those who want to see it all in person -- and there is no better live sporting event than a slate of prizefights -- tickets are still available at the Family Arena.