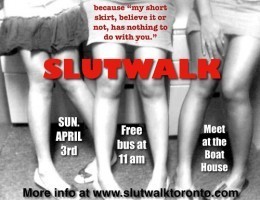 A Toronto cop pissed people off all over the world when he told women early this year that a good way to avoid assault was not to dress like sluts.

Outraged folks planetwide have been organizing "SlutWalks" to assert that no matter how a person is dressed, assault is always wrong -- and advance the radical notion that rape is entirely the fault of, y'know, rapists.

KMOX's Charlie Brennan finds this to be just hysterical, apparently.

As we told you back in April, Brennan Peters has decided to bring a SlutWalk into St. Louis. She didn't have a concrete plan back then, but now the event is happening Saturday, July 16, in the Grove neighborhood. (Lots of good stuff is planned--we'll let you know more as the event gets closer.)

Last night on KMOX, Charlie Brennan was discussing SlutWalks in general, comparing walking around in a short skirt to whistling Dixie with a Confederate flag in north city or burning an American flag around a bunch of Marines.

"You dress like a prostitute, what are you letting people know?" he asked one female caller.

But our favorite hilarious witticism came when a caller hipped him to the fact that St. Louis is having one, and soon: "I am so sorry I'm going to be out of town July 16th! ... Maybe it'll be sponsored by KMOX radio!"