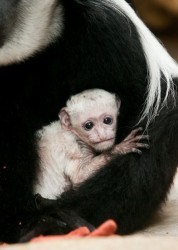 There's a new face at the St. Louis Zoo, and it's adorable. And pink, for now.

A baby colobus monkey, born May 20th, is on view at the primate house starting today. The little fella, named Mosi, will eventually lose his white fuzz and pink face in favor of the distinctive coloring of the species--mostly black with a white face and part of the tail, and a long white shoulder fringe recalling fat Vegas-era Elvis.

The species is native to central Africa. They're vegetarians, living off fruits, flowers and twigs in the forest and helping to propagate the plants they eat by leaving seeds behind in their travels.

Mosi's mother isn't actually named Mrs. Robinson -- she's Roberta -- but you'd be forgiven for making the joke. She's 23 years old to Papa Kima's 5. The name "Mosi" means "firstborn son" in Swahili, though Roberta has other offspring. In fact, she was such an experienced mother that when she arrived in St. Louis, she was assumed to be past all that.

How cool that she wasn't. Mosi is the first colobus monkey born at the zoo in eleven years.