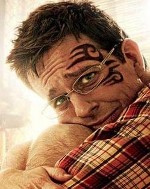 It looks like Tattoogate has finally reached its end.

The south-central Missouri tattoo artist who sued the producers of The Hangover Part 2 for copyright infringement has now reached a settlement for an undisclosed amount of cash.

As far as legal narratives go, this was one of the wackiest, if only for its ability to unite a New Zealand tribal culture, a booze-filled bromance film, Iron Mike Tyson and a rural business called the Paradox-Studio of Dermographics all under one dysfunctional roof. With so many clashing ingredients in the mix, it's no wonder The Hangover caused a hangover.

The collective headache, though, appears to have subsided now that the Missouri needle man, S. Victor Whitmill, has settled with the film's production company, Warner Bros. Entertainment. The brouhaha, which drew national attention, centered on the now-famous tattoo, inspired by the Maori tribe of New Zealand, that Whitmill designed and originally inked onto Mike Tyson's face.

When the filmmakers painted the tribal symbol around the left eye of actor Ed Helms without seeking Whitmill's permission, he sued, asking a federal judge in the Eastern District of Missouri to halt the release of the blockbuster comedy sequel. For awhile, there was talk of either postponing the release of the film, or digitally altering the DVD version so as to wipe the tattoo from Helms' face and the public's memory.

On May 24, a judge denied Whitmill's request for a preliminary injunction. Since its release a few days later, the film has so far earned almost $500 million worldwide.