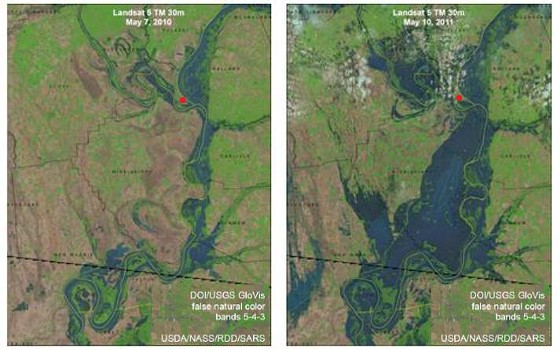 The Army Corps of Engineers decision last month to blast the Birds Point Levee to save the town of Cairo, Illinois, will cost Missouri farmers $42 million, according to the University of Missouri.

The school's Food and Agricultural Policy Research Institute (FAPRI) came up with the figure based on estimated yields and prices of crops grown in the 130,000 acres of Missouri farmland flooded following the levee breach. The FAPRI report (viewable here) suggests that farmers would have grossed $85 million from corn, soybeans, wheat, sorghum, cotton and rice planted in the flooded region.

Of that $85 million, farmers would likely net about $45 million in profits. The study further suggests that farmers spent at least $15 million prior to the flood preparing for the planting season. That sum will not be recouped, meaning total losses for farmers actually add up to around $60 million. The good news is that insurance and disaster funds will repay the farmers $18 million. Take $60 million and subtract $18 million and voila! You get a total loss for Missouri farmers of $42 million -- or $314 per acre.

Based on that figure, let's see if saving Cairo was economically worth it...

Cairo has around 2,800 residents today. In 2009, the per capita income of those residents was $14,797, according to the Census. Assuming -- at worst -- that all those people would have been put out of work for a full year had their town flooded, you come up with a loss of economic activity of $41.4 million ($14,797 x 2,800). That figure is just slightly less than the $42 million in losses the flood cost Missouri farmers.

Note: The cost of rebuilding Cairo had it flooded is another formula all together. But as we've suggested before, perhaps the town is not worth rebuilding.