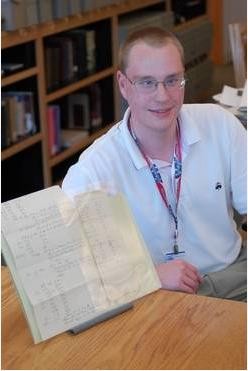 We here at Daily RFT know what a disillusioning experience internship can be. You walk in on your first day, full of hope that you will spend the summer accomplishing something meaningful and launching your brilliant career, which will compensate for you having to invest all this time and effort for no pay. Instead, your supervisor escorts you to the Xerox machine and the filing room. Welcome to your summer!

But we don't come here today to discourage you. Instead, we want to offer hope. Read on, then, for the story of David Spriegel, a young man who is just like you, or at least very similar, spending the summer before his senior year at St. Mary's University in Winona, Minnesota, at the Abraham Lincoln Presidential Museum and Library in Springfield, Illinois.

Among Spriegel's duties at the museum is sorting through papers and documents and examining them for signs of historical interest. On the morning of May 31, his second week on the job, his supervisor, Cheryl Schnirring, handed him a stack of papers to sort through. They mostly pertained to land transactions and mortgages in Springfield in the 1840s. Exciting stuff, right? The papers had arrived at the museum via a donor three years ago, but the museum has a small staff and, aside from a visit to a document-flattening service last summer, nobody had bothered to look through them until now.

But in early afternoon -- Spriegel is coy about whether it was after lunch, though he was quick to add that lunch is allowed for interns at the Lincoln library -- Spriegel uncovered something interesting among the letters and receipts: two legal briefs pertaining to a land dispute in the town of Taylorville, about 25 miles southeast of Springfield. Not that the briefs themselves were particularly interesting, but what caught Spriegel's attention was the scrawled notation on the back of the briefs that said, "This is the handwriting of Abraham Lincoln." 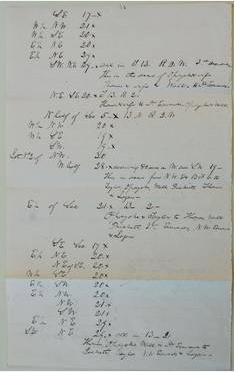 The scrawl was the work of Milton Hay, who worked as a clerk in Lincoln's law office. "James Cornelius [curator of the museum's Lincoln collection] seems to think the writing was done later in Hay's life," Spriegel reports. (Though Hay later became a prominent citizen of Springfield, Spriegel is unable to confirm whether he was any relation to John Hay, who was Lincoln's personal secretary during the White House years.)

Let this be a lesson to you interns if you should make an important historical discovery sometime this summer: Instead of screaming, "HOLY SHIT, THIS IS THE HANDWRITING OF ABRAHAM LINCOLN!" Spriegel calmly and professionally summoned research librarian Glenna Schroeder-Lein and informed her what he had found. Schroeder-Lein took the documents to the Lincoln experts upstairs, among them Cornelius, who verified that, yes, the handwriting was indeed Lincoln's and that they pertained to the case Updike et al v. Godfrey et al from March of 1844.

"The handwriting is legible," Spriegel reports. "The experts determined that one note was entirely by Lincoln. The second, the majority was by Lincoln. Part of the note is in pencil, and it's very faded and difficult to read."

In the face of media attention, Spriegel received confirmation from his superiors that he was able to take credit for the discovery. The two notes will become part of the library's permanent collection and will be available for online viewing in the fall. As a souvenir, Spriegel received Xerox copies.

"I'm very happy to be part of [the discovery]," Spriegel says humbly. "I'm a history major, but most of the classes I've taken have focused on the twentieth century. I've only been exposed to Lincoln and the Civil War in survey classes. This will encourage me to dig deeper into Lincoln's life and early legal career."