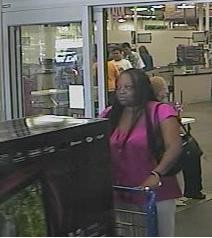 Have you seen this woman? She was last seen June 6 leaving the Ferguson Sam's Club in a late-model white Ford Expedition, which, incidentally, is one of the few vehicles large enough to carry her latest acquisition: a 65-inch, Vizio 3D television.

St. Louis County police say that prior to purchasing the TV, the woman received a Sam's Club credit card using another person's name and information at the company's O'Fallon, Illinois, store. The woman then used the credit card to purchase the big-screen telly from the Ferguson Sam's Club.

Anyone with information on the identity of the suspect or her vehicle is asked to contact Detective Shanika with the St. Louis County Police Department at 314-615-0716 (bshanika@stlouisco.com) or Crimestoppers at 866-371-TIPS.