1015 Locust Fails to Sell at Auction 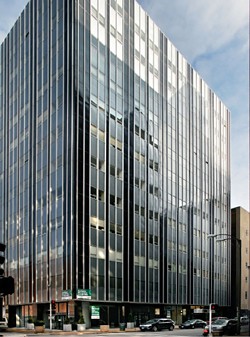 So much for that.

1015 Locust, the downtown office building that went up for online auction earlier this week, is looking less like the belle of the real-estate ball and more like the kid with B.O. that no one is willing to dance with.

Rick Weinberg, vice president of public relations for California-based auction.com, tells Daily RFT that bidding topped out at $2.75 million -- and the property's owners declined to accept the offer.

As we previously reported, the owners paid $6.1 million for the building in January 2008 -- and then spent another $4 million to renovate it.

And so even though the opening bid was set at $1.5 million, it turns out they weren't willing to sell quite so cheaply. "There were 109 bidders," Weinberg reports, "but, surprisingly, they really didn't go near what the sellers were looking for with this."

The property could go back on the virtual block for the company's next auction, Weinberg says, or the owners could choose a different strategy to unload it.

He estimates that roughly 70 percent of auctions handled by his company end with a deal, even in the still-depressed economy. "This one is in that 30 percent," he says.