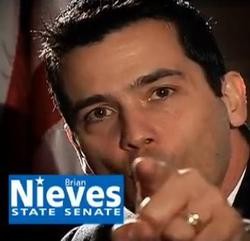 The political consultant who claimed he was beaten, held hostage and intimidated during a run-in last August with then-state Representative Brian Nieves has filed a civil suit against the politician in Franklin County Circuit Court.

In a complaint (viewable in all its glory here) filed August 5 with the Washington Police Department, Shawn Bell says he stopped by Nieves' campaign office to congratulate staff members for their victory in the Republican primary. Bell, a fellow Republican, had worked on a rival campaign.

Upon seeing Bell inside his campaign office, Nieves allegedly drew a gun on Bell and head-butted him, according to the police report.

Bell was then allegedly forced to take off his shirt -- out of concern that he could be wearing a wire -- and forced to call Nieves' wife and apologize for a letter circulated during the campaign that suggested Nieves had been cheating on his spouse.

The Franklin County prosecutor eventually declined to file charges against Nieves, saying he could not prove the allegations beyond a reasonable doubt. Yesterday, Bell's attorney told the Post-Dispatch that both sides have been attempting to reach a settlement since last year. When that didn't happen, Bell filed the civil suit.

"This isn't really about money to Mr. Bell," attorney Alan Mandel tells the paper. "This is about discouraging this type of behavior from happening again."

Curiously, Nieves has recently been accused of a somewhat similar incident when he allegedly threatened and berated three constituents who were visiting his office in Jefferson City.

In that instance, Nieves allegedly told one of the constituents that he had jeopardized the safety of Nieves' family by noting in a letter to the editor that Nieves was out of town attending a right-wing political convention in Cincinnati. (Never mind that Nieves' job requires him to be in Jefferson City -- and away from his Franklin County home -- throughout the legislative session.)

The three constituents have since filed a formal ethics complaint against Nieves with the Missouri Senate.

News Politics See You in Court!