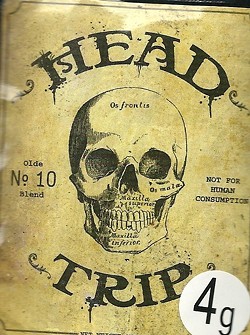 A couple tokes of fake pot sold under the name "Head Trip" sent a 25-year-old man from western Missouri to the emergency room last week.

Johnny Adkins, 25, says he purchased the drug -- sold as "incense" -- at a gas station in Odessa, Missouri. Moments after inhaling the synthetic marijuana, Adkins went into a seizure. His mother, Tammy Groves, gave her son CPR and called for an ambulance. Groves tells Fox 4 in Kansas City that her son's heart actually stopped beating for three minutes before he was revived.

Groves say that she has since gone to the gas station where her son bought a packet of Head Trip for $40 and asked that the business stop selling the drug.

The gas station's management said it would in August, when a state ban on new forms of synthetic marijuana and cocaine is expected to go into effect in Missouri. Groves believes that's too long to wait. The ban should be enacted now.

"I believe it's about money, about making a profit regardless of the harm that it could do to others," she says.

Yep. That's pretty much the argument laid down by a vendor suing the state to stop the ban and allow him to keep selling the stuff.