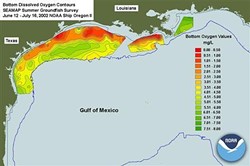 We know it's just a coincidence that the motto for New Hampshire is "Live Free or Die." Still, we couldn't help but see some gallows humor in that slogan when the U.S. Geological Survey announced today that this year's "dead zone" in the Gulf of Mexico is likely to reach the size of New Hampshire.

All told, scientists believe the impact of spring flooding along the Mississippi River Basin could create a "hypoxic zone" in the Gulf measuring between 8,500 and 9,421 square miles this year. Such an estimate almost guarantees that this year's dead zone will surpass the 2002 record of 8,400 square miles.

Hypoxia is caused by excessive nutrient pollution, often from human activities such as agriculture, that results in too little oxygen to support most marine life in bottom and near-bottom water. And, as the New Hampshire motto suggest, those animals who can't free themselves from the polluted region will likely die.

Last month the stream-flow rates in the Mississippi and Atchafalaya Rivers draining into the Gulf along Lousiana's seashore were nearly twice that of normal conditions, according to USGS estimates. Meanwhile, the amount of nitrogen spilling into the Gulf this May from the two rivers was 35 percent higher than average May nitrogen loads estimated in the last 32 years.

The impact of this year's dead zone on the $629-million fishing industry in the Gulf remains to be seen, though the USGS plans to release the official size of this year's hypoxic zone following surveying in late July and early August. Stay tuned...