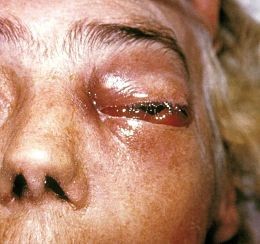 Just when you thought things in Joplin couldn't get any more post-apocalyptic, the Huffington Post reports this morning that a rare and deadly fungus is now infecting tornado survivors.

Zygomycosis happens when soil or vegetative material gets embedded under the skin, and it's one of the most rapidly-spreading fungal diseases, which means it needs to be treated immediately for a patient to have a chance of survival, either with drugs or by cutting out the infected tissue.

Most of the time, it starts in the nose, and then spreads to the brain, the lungs and other parts of the body. It usually occurs in people whose immune systems have been compromised in some way -- or victims of a natural disaster.

It's not a pretty sight. "This fungus invades the underlying tissue and actually invades the underlying blood vessels and cuts off the circulation to the skin," Dr. Uwe Schmidt, an infectious disease specialist at Freeman Health System in Joplin, told the Huffington Post. "It's very invasive. We could visibly see mold in the wounds. It rapidly spread. The tissue dies off and becomes black. It doesn't have any circulation. It has to be removed."

In his 30 years of practice before the tornado, Schmidt said he'd only seen two cases of zygomycosis, both in patients with untreated diabetes. Since the tornado, he's treated five. Three of those patients have died. Other doctors, mostly in Springfield where Joplin victims were transferred, have reported cases as well; the Missouri Department of Health and Senior Services says that since the tornado, it's received a total of eight reports zygomycosis.

Schmidt stressed that he wasn't sure the zygomycosis outbreak could be blamed entirely on the tornado. "These people had multiple traumas, pneumonia, all kinds of problems," he said. "It's difficult to say how much the fungal infections contributed to their demise."

But Schmidt also said that he believed that most of the patients had been on the receiving end of inadequate medical care in the wake of the tornado. Doctors from St. John's Hospital, which had been destroyed, treated their patients in a makeshift facility, and Schmidt's own hospital, Freeman Health Systems, saw 1,700 patients.

With the medical system so overtaxed, some patients slipped through the cracks; Schmidt reported that, in many cases, he'd had to reopen wounds that had already been stitched up because they hadn't been properly cleaned. The first case of zygomycosis appeared about a week after the tornado.