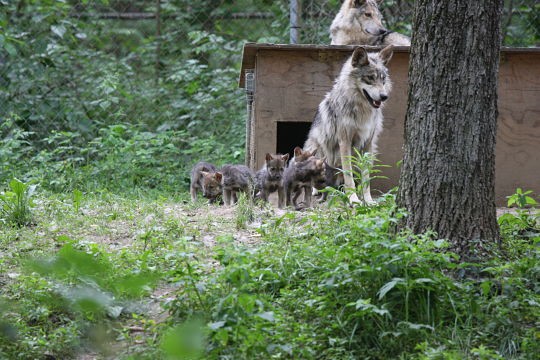 Look at those faces. Outside of a moon scene on a novelty T-shirt or the violent parts of a Jack London novel, that's as close as most of us will get to a Mexican gray wolf. And that's for the best: Efforts to repopulate the wolves, an endangered species since 1976, depend heavily on them retaining the instinct to fear human beings.

But in order to survive the wildfires currently raging through their home in eastern Arizona, they'll need to rely on an entirely different set of instincts.

Commonly known as "lobos," Mexican gray wolves are native to, and frequently relocated after captivity to, the Blue Range recovery area on the border of New Mexico and Arizona -- a large swath of which is currently being consumed by fire or in danger of the same fate.

Like Wile E. Coyote, the Mexican gray wolf has not caught a break in a long time: Only 50 are believed to currently exist in the wild, and all of those can trace their ancestry to Missouri's Endangered Wolf Center.

Officials at the center in Eureka, where the wolves are bred, raised and collared before they're released into the wild, have been tracking the three packs (up to 20 of the 50 total wolves) in the fire area or close to it.

The good news: As of the most recent data, the packs are safe. The bad news: Scientists can't do much to keep them that way.

"It's a very intense fire burning through there," says Regina Mossotti, director of animal care at the Endangered Wolf Center. "The U.S. Fish and Wildlife Service is monitoring the wolves as close as they can, but they aren't able to do anything as far as rescue. One thing we have to remember is that these guys live in a fire-prone area, so we have to trust that they'll use their instincts."

The species' numbers have dwindled for years, likely the result of government-sanctioned hunting in the late 19th and early 20th century. "They had the misconception that no predators meant lots of elk and deer," Mossotti said. "And that is a hunter's paradise." At one point, the wolves were actually considered extinct. Today, including the number in captivity, the total number of Mexican gray wolves in the world is at most 350. 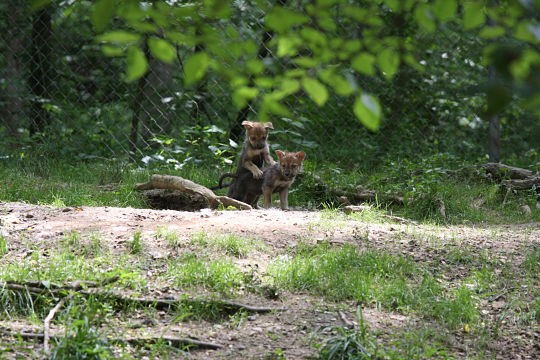 Although the species used to inhabit areas from Arizona to Texas, and as far as Mexico, all wolves raised in captivity are currently released into the same area. And so if the pups in the photos, born May 1 at the center, pass the required tests and remain scared of humans, the plan is to release them into the same fire-prone are when they reach sexual maturity (around age two). Scientists are likely to release the entire pack -- the six puppies, their mother Abby and their father Perkins (named by actress Betty White) -- because their chance of success in the wild increases as their number grows.

In the meantime, plans to release an older pack into the northern Arizona area this summer have been put on hold, pending the outcome of the fires. "It's a scary thing for the species, but wildlife that are in fire-prone areas are very good at dealing with it and bouncing back," Mossotti says. "From what we can tell, they're doing a good job so far. It's amazing how much their instincts take over."