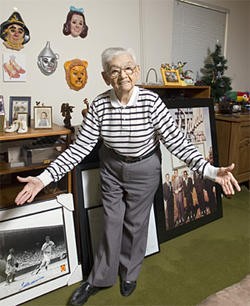 Linda Dodge, the former caretaker of Wizard of Oz actor Mickey Carroll, has filed a lawsuit against the National Enquirer and Carroll's niece, Janet Finocchiaro, claiming Dodge was defamed in an article appearing two years ago in the gossip magazine.

The May 25, 2009, piece, titled "Munchkin's death sparks legal feud," alleged that Janet Finocchiaro accused Dodge of stealing more than $1 million from Carroll's estate and assaulting and abusing the actor. The article included a photo of Carroll with a bruise to his forehead.

The four-feet-seven-inch Carroll died May 7, 2009, at the age of 89. His birth name was Michael Finocchiaro.

In her lawsuit filed May 24, Dodge is seeking at least $25,000 for emotional distress from the National Enquirer and Janet Finocchiaro -- and at least $75,000 in punitive damages. Dodge claims in the suit that she was friends with Carroll for twenty years. Carroll and a disabled nephew who lived with him moved into Dodge's home in 2009 so she could better care for them, according to the suit.

Neither Dodge nor her attorney, Daniel Sayles, could be reached for comment.

Meanwhile, American Media Inc., the company that owns National Enquirer, tells Daily RFT this morning that it "denies every allegation" put forth in Dodge's complaint.

"The Enquirer was simply reporting upon a lawsuit that was prepared by the family of Mickey Carroll," says spokeswoman Samantha Trenk. "Simply put, there was nothing in the story that wasn't in the court file."

Moreover, Trenk contends that the May 25, 2009, issue of the Enquirer was actually published on May 18 of 2009, meaning that Dodge's lawsuit filed on May 24 of this year exceeds the two-year statute of limitation for defamation suits.

McCarthy acknowledges that he filed a petition on behalf of Janet on May 7, 2009, asking the court to grant Janet guardianship of Carroll, who'd been diagnosed with Alzheimer's. In that petition, Dodge is accused of wasting the actor's assets and exploiting him by having him tour and make appearances for money that Dodge then retained for her own purposes.

The petition was quickly rendered moot, however, because it was filed the same day that Carroll died. Since then, McCarthy says he's been assisting Janet -- who lives in Dallas -- with probate matters. McCarthy says he has tried unsuccessfully to have Dodge assist the family in locating and discovering all the assets in Carroll's estate.

"We subpoenaed her for deposition," says McCarthy. "She took the Fifth."

P.S. Now is the not the first time that Dodge has been in the center of debate regarding the accuracy of what may -- or may not -- have occurred in the life of Mickey Carroll. In 2007 Dodge began a campaign to get Carroll a star on the St. Louis Hall of Fame, but the diminutive actor came up short when judges found several inaccuracies listed on the biography that Carroll and Dodge submitted to the committee.
____________________________________________________
Keep up on all the latest St. Louis regional news and gossip by following @chadgarrison on Twitter and Daily RFT on Facebook.