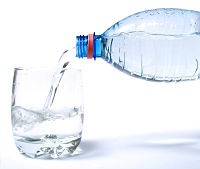 What's that in your hand? A Dasani bottle? Are you eating out of Tupperware as you read this?

If the answer to any of these questions is yes, you might not want to read about a recent study conducted at the University of Missouri (which, yes, we are about to tell you all about). You should probably also watch out for spills on your keyboard.

The study examined the levels of Bisphenol A (BPA) in mice after introducing the chemical into their diets. And while BPA is found in many common plastics, the study found that previous research focused on BPA in food hasn't done justice to the realities of its side effects.

When introduced to BPA through their diet, the scientists found, the mice tested faced significant exposure to the active form of BPA. That's the form that affects estrogen, testosterone and thyroid health. It can also cause genetic abnormalities.

According to the study, the world is introduced to 80 billion new pounds of BPA each year, and around 90 percent of humans world contain a "measurable" amount of BPA inside of them. The scientists who conducted the study noted the need for further research further to understand how BPA travels inside the human body.

You can go back to your water now. But perhaps you'll think twice about that plastic bottle you're raising to your lips. Glassware, anyone?