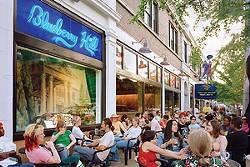 Yesterday Daily RFT detailed the city council's plans for a special session to discuss a bill against sidewalk and street loitering in U. City to be held last night.

Bill 9112, contested hotly enough to require two extra rows of chairs at the basement meeting, includes language that would allow it to guard against "offenses against public peace and decency" through a rule against "obstructing or interfering with use of sidewalks and streets." Daily RFT can vouch that last night there were more people loitering at the council meeting than in the streets around it.

But not for long.

In less time than it takes to read the official language in the ordinance, Bill 9112 was mowed down as if by Uma Thurman. Councilman Arthur Sharpe began the meeting with a motion to postpone the bill indefinitely -- or, in layman's terms, basically kill it. Because of the bill's larger implications and its somewhat nebulous language, however, Councilman Byron Price preferred to kill it dead. "We have enough tools in our toolbox," Price said. " ... I'd like to see this bill killed, not postponed indefinitely."

The moderately ramped-up discussion received a generous amount of claps and snaps from onlookers in the back rows but meant the entire meeting was over almost as soon as local TV crews had finished setting up their equipment. After a unanimous vote to officially kill the bill -- with that exact wording -- the council moved onto the budget, and more than half the room made for the exit. The council won't reach any conclusions about the budget until its meeting this coming Monday.

"Thank you very much," Mayor Shelley Welsch said in conclusion. "Bill No 9112 is killed."