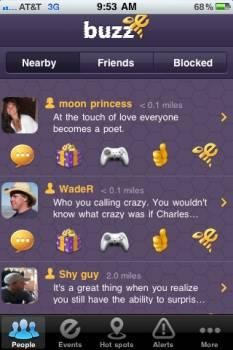 In May 2010, Brett Rosen walked into a San Francisco restaurant and noticed that almost everyone sitting at the bar was fiddling with a smartphone. That's when he got the idea. If people at a bar are going to be on their phones anyway, he thought, they might as well be interacting with the people around them.

A year later, Rosen and his partners Rohit Thadani and Steve Johnson launched BuzzE, a social networking app for smartphones.

BuzzE uses GPS technology to show users (Buzzers?) other users who are nearby. Someone's profile picture catches your eye? You can "buzz" her (the rough equivalent of a Facebook "poke" or a real life wink), chat with her, buy her a virtual drink and play games together like "How Hot Are We?" and "I Found You!" This digital interaction, if you play your cards right, sufficiently breaks the ice so that you can meet up with her and buy her a real drink. So basically, it's a way better wing-man than your college roommate.

However, Rosen stresses that "this isn't a meat market app," and that BuzzE is intended to serve any and all of a person's social networking needs. For instance, BuzzE lists various public and private events, complete with their proximity to the user. The app also features a "Hot Spot" map that charts where users are congregating.

"It's really about, in a very casual way, getting to know and making friends with people who happen to be in your same area," says Rosen, who lives in St. Charles. "My vision is for this to be the ultimate social Swiss Army knife, a tool to get all the social information you need."

Currently, BuzzE has around 1,000 registered users. Like any other social networking mechanism, the more people who join the more useful it becomes. And while Rosen has pumped $10,000 from his own pocket to fund BuzzE, he says he is more interested in the social currency of his product than financial success (although through advertisement sales he anticipates breaking even around the 10,000 registered user mark).

"I wanted to do something where I could make my mark," he says. "Provide people something of value."

The app, available for free on iTunes, is only compatible with iPhones so far, but an Android version is in the works.