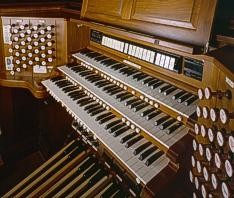 If you're in desperate need of a pipe organ, or a digital organ, or spare parts for a pipe or digital organ, or even an organ factory, get yourself over to Highland, Illinois, (about 45 minutes northeast of St. Louis) right now. Wicks Organ Company, which has been in business for 105 years, ever since the three Wick brothers -- watchmaker John, cabinet-builder Louis and jeweler Adolph -- combined their talents to build a pipe organ for their local church, is currently auctioning off 15,000 lot of tools and parts, not to mention the building itself.

The company is not going out of business, emphasized president Mark Wick. But, like companies all over the country, Wicks has been hit hard by the recession and has been downsizing in a major way. It's now too small for its 81,000 square-foot factory and finds itself with more spare parts than it can possibly use. Or, as Mark Wick puts it, "We've collected quite a bit of stuff over the past 105 years."

The most radical part of Wicks' downsizing plan, however, doesn't involve the auction.

In order to cut his overhead costs, Wick recently cut half a dozen employees from the company's payroll and set them up in business as independent subcontractors. Essentially, Wick explains, they'll be performing the same jobs they did at Wicks.

The company will provide them with the equipment and tools they need to get started, not to mention the advice of senior employees with more than 100 years of experience between them. Most importantly, the Wicks will give them their clientele. "They'll be our first choice when we need outside vendors," Wick says. "They're experienced craftsmen and craftswomen. They're good with their hands. We want them to continue with their craft instead of flipping burgers."

They will also, Wick adds, be making more money than they did on the company payroll, minus whatever they'll have to pay for insurance. "They'll be getting a taste of what I see every day," Wick says with a laugh.

Wick says he borrowed the idea of turning employees into subcontractors from the auto industry. "Everyone has been using the negative term 'downsizing,'" he says. "I prefer the term 'smartsizing.' I have to do it. It's the best way we can service customers and stay in business."

As for Wicks Organ itself, Wick expects the company's future to be settled today, when the factory and land come up for auction. Depending on who buys the building, the company may be able to lease back space instead of having to relocate.

"Our competition wants us to be out of business," Wick says. "But Wicks is going to continue to build new pipe and digital organs. It's just not going to be under one roof."