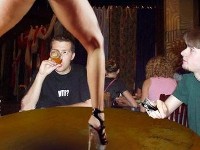 Many patrons of strip clubs appreciate the long, svelte limbs of the performers onstage. But for one disgruntled ogler on the Illside, there's such a thing as too much leg. Especially when that leg is connected to a platform shoe.

A man named Andrew Deluca has filed a lawsuit against PT's Showclub, a strip joint in Centreville, Illinois, after receiving a high-heeled kick to the slack-jaw by a dancer who apparently didn't know how much range she had. Deluca was presumably sitting in the front row. We don't know how far he was leaning toward the stage when the incident occurred.

The story was first reported by Courthouse News Service.

Deluca, who says he was nailed with the bombshell's boot on February 10, 2010, filed his negligence suit with the Circuit Court of St. Clair County. According to the complaint, the club "failed to properly train the employee so that her foot would not extend in the area commonly and customarily utilized by its invitee" and "failed to warn its customers ... about the danger of standing in the area of the raised stage." The dancer, who was not named as a defendant, "also failed to properly observe the area around her to determine whether or not it was safe for her to extend her foot in the area around the raised stage commonly occupied by patrons of the establishment," according to the lawsuit.

A spokesperson for VCG Holding Corporation, which owns several strip clubs across the country, including PT's, declined to comment on the litigation.

Deluca claims to have needed extra dental work and says he will continue to suffer great pain and mental anguish as a result of the injury.