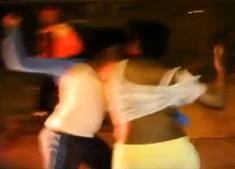 Update, June 3: Police have arrested two women, ages 18 and 20, and plan to present the case to prosecutors.

Update, June 1: St. Louis police now report that they did receive two 911 calls on April 17. Both calls were made within seconds of each other at around 11 p.m. and reported a street fight in progress without any signs of apparent weapons. Police were dispatched to the scene at 22nd and Dodier, but by then the crowd was gone. The department says it has made some additional progress on the case.

The following video is the talk of the town today in St. Louis.

KMOX host Charlie Brennan mentioned the video on his show this morning, and soon the switchboards lit up with callers venting frustrations over the teen violence plaguing St. Louis.

St. Louis police reportedly caught wind of the video over the weekend and are investigating the matter. The incident -- in which a teenage girl is hit with a crowbar and left convulsing on the pavement -- apparently occurred at the intersection of Dodier and 22nd Street in the St. Louis Place neighborhood of north city. Police say they have no 911 calls from that location in the past six months.

Without further ado, here's the video. Warning: It's pretty graphic. You can actually see blood fly from the girl's head and land next to her on the street.