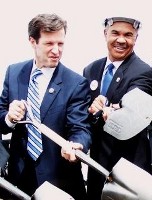 We can officially say it now: Representative Russ Carnahan is getting the axe.

What? Don't we have to wait for the 2012 elections for the fallout from redistricting -- when Missouri's shrinking population might force Carnahan out of a congressional seat?

Actually, this particular axe is one we imagine the St. Louis congressman will accept with pride. At an ceremony planned for 11 a.m. today at Lafayette Fire Company No. 1, the St. Louis Fire Department will present Carnahan with an honorary hatchet, in thanks for his efforts that secured a federal grant earlier this year, preventing Fire Department layoffs following a bitter dispute over pensions.

In April, St. Louis was awarded a $3.2 million SAFER grant to rehire 30 firefighters who were laid off for one day in the midst of the pension tussle. Carnahan worked with the Department of Homeland Security, which administers the grants, to help save the jobs.