Philosophically Speaking, St. Louis Was to Be Far Superior to Chicago 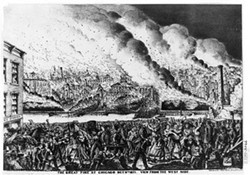 Hard to believe today, but, 140 years ago, one of the most exclusive clubs in town was the St. Louis Philosophical Society.

The organization, started by a couple followers of German philosopher Georg Hegel, published the influential journal, Speculative Philosophy, and counted among its regular attendees St. Louis luminaries such as Joseph Pulitzer.

Members of the society applied all kinds of subject matter to Hegel's philosophy of the rational and irrational. Topics sure to spark passionate debates included science vs. religion; abolitionism vs. slavery and -- alas -- Chicago vs. St. Louis.

It was the latter that eventually doomed the organization.

One of the founders of the club -- Henry Conrad Brokmeyer -- interpreted Hegel's teachings to suggest that a city in the American West would rise up to become a cultural mecca of the ages -- on par with Athens, Rome or Paris. Brokmeyer believed that city was St. Louis.

In order for that to happen, though, St. Louis would have to beat out its rival to the north -- Chicago.

From an article this month in The Daily:


Nothing could touch Brokmeyer for as long as St. Louis thrived. In 1871, when a massive fire turned Chicago into a pile of metropolitan ash, Brokmeyer failed to hide his schadenfreude. "Chicago was the completely negative city of our West and indeed of our time," Brokmeyer told the group, "and now she has carried out her principle of negation to its final universal consequence; she has simply negated herself."

Brokmeyer was making bolder and bolder predictions about his adopted city, and St. Louis rose to meet them. The city's harbor was second only to New York. Already, between 1820 and 1860, the population had grown seven times over. Meanwhile, he spent the latter years of the decade as Missouri's lieutenant governor.

The census that year showed that Chicago had eclipsed St. Louis in population by 150,000 people. Brokmeyer hired a mathematician at Washington University to dispute the census, but the academic could find no wrong.

OK, no they didn't. They disbanded.