Bikers In Joplin Chase Off Religious Protester; But Was Man With Westboro Baptist Church? 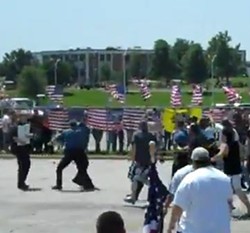 Have you seen the video yet of the bikers in Joplin chasing off the protester purported to be affiliated with the Westboro Baptist Church?

The incident occurred Sunday when President Barack Obama was in Joplin to take in the devastation from last week's deadly tornado. Also scheduled to make an appearance that day were were members of the Westboro Baptist Church, who last week issued a press release thanking God for the 120-plus fatalities in Joplin and announcing a protest of the "beast antichrist" (a.k.a. Obama).

Here's a that shaky YouTube clip showing police escorting the religious protester away from an angry mob. In the background, bikers on hand to counter-protest the Westboro Baptist Church can be heard revving their engines.

But was the protester really a member of the Westboro Baptist Church?

According to the Joplin Globe, the answer is "no." The newspaper reports that the Westboro Baptist Church failed to arrive in Joplin on Sunday. The man chased from the scene Sunday was apparently a freelance proselytizer from Arkansas -- and not from Westboro's home camp of Topeka, Kansas -- who was mistakenly shepherded into the area reserved for the Westboro Baptist Church.

After being escorted away from the scene, police reportedly drove the man to the county line.

The county line? What is this? Rambo?