Bobby Fischer Against the World -- the Tivoli Premiere 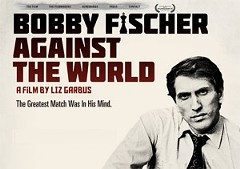 The most stunning moment of Bobby Fischer Against the World, the documentary making its premiere at the Tivoli Theatre last night, would be easy to miss if it weren't so eerie.

The charming, 29-year-old chess genius has just won the single greatest match of his life -- and maybe the game's history. During an interview after the fact, his eyes are flat, and when asked what the next chapter of his life holds, his answer is, "My goal is to play a lot more chess. I feel I haven't played enough chess."

That wild, unseeing passion characterized the dynamic life onscreen at the Tivoli last night. Around 300 people showed up for the event, which both celebrated the documentary and highlighted the success of the St. Louis chess scene -- which is gaining a reputation as the chess capital of the country.

On September 9, the World Chess Hall of Fame will finalize its move to St. Louis, and three grandmasters, two of whom are local, attended the premiere, along with fans of both the game of kings and its fallen hero. 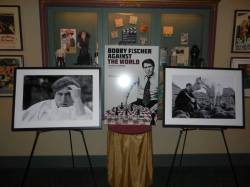 Many who attended Bobby Fischer Against the World joked about the sanity of American chess champions. The track record is not great.

But the crowd was, suffice it to say, intensely into both the movie and the game. This correspondent brought a notebook into the theatre, only to draw praise from a fellow movie-goer who assumed I was recording chess moves: "What a great idea. There's a lot of good stuff in this movie. A lot of good games."

Daily RFT talked to V.I.P.s at the premiere about the St. Louis chess scene, the film and the mixed blessing of constantly waiting for the next Bobby Fischer.

Susan Barrett, director of the World Chess Hall of Fame: The St. Louis chess scene seems to suddenly have boomed. What is our official rank in the community?

The chess club has had a tremendous success here. There has always been chess history here dating back to the 1890s, but it wasn't unified into one club during the last decade or two. Delmar has traditionally had a very heavy chess scene -- it's the Washington Square Park of St. Louis. The scene really unified when the chess club here became successful, and St. Louis is now the chess capital of the country.

Liz Garbus, the film's director: Did Bobby's passion for chess teach you anything about your own for filmmaking?

Well, I haven't been doing nothing but filmmaking and practicing it since the age of six, like Bobby with chess, so I don't have quite the same singularity. But I can relate to that. His experience was unique in that his passion began very early, and you can't help but learn something about your own through telling his story. It's a dangerous thing but also an extraordinary one.

What was the hardest part of the filmmaking process?

The editing was very challenging. My editor was killed during it, and that was a huge personal tragedy for us but also for the film. It was also a storytelling challenge because I wanted the narrative to feel like a thriller, especially for people who might have forgotten the history of Bobby Fischer's success, but at the same time feel like an honest documentary. He was a very complicated person, and that was sometimes hard to capture during editing.

The documentary has played at festivals all across the country and will be on HBO soon. Why do you think so many people have come to see Bobby's story?

In the audience tonight, we have anywhere from chess grandmasters to people who have never played or thought about playing chess. Those who play it might see their own relationships to chess reflected on the screen in some ways, and those who don't might be glad they never played chess for that reason (laughs). They're all trying to get to know someone, and it's a journey into knowing Bobby. My job was making the chess world both accessible and exciting.

Can you pinpoint the exact moment the film began?

It started on January 18, 2008, when I read Bobby's obituary. I was alone on a plane reading the New York Times. Thankfully there was no Wi-Fi, or I might have missed it. Then I was at Sundance with another film and thinking about the idea, and there was so much creative energy there that I knew it had to happen. It was just an incredible story that needed to be told. The match of 1972 gave me an incredible burden of responsibility to both tell his story and do it well. Bobby didn't like people to talk to the press, and I don't think anybody ever embarked on a documentary to tell his entire story.

Why is it important for Bobby's story to be told?

Chess is a game of black and white, of opposites, clarity, precision, beauty. Bobby Fischer existed in the world at a very unique time when the world itself seemed to be aligned on those black and white squares. People wanted to make him a saint or a terrible person, but he's not either. There's room to appreciate him in those gray areas.

St. Louis grandmasters Ben Finegold and Hikaru Nakamura: What is it like to feel the weight of Bobby Fischer on the U.S. chess scene?

Nakamura: Since Bobby Fischer, you haven't had any really strong American players competing for the world championship. Since then, every time there is a good American player, everyone hopes he will be the next Bobby Fischer. For me, it's a benchmark for me to weigh my own success against and a way to make chess popular in the U.S. again. Rex Sinquefield and the local chess club have been trying to build on that, and a lot of people have been looking at what's going on.

Finegold: He transcends chess. Most people are known in their sports and bring interest to other people and become a symbol of that sport, but few people, like Michael Jordan and Bobby, transcend all that. In some ways he's famous for the wrong reason, but he doubled the numbers for the U.S. Chess Federation. My dad's a chess master and played Bobby Fischer in 1963 in Bay City, Michigan. He studied that board for a long time.

How would you feel about your own story ending up on film one day?

Finegold: You won't be telling my story -- but you will be telling [Nakamura's].

Nakamura: No one is perfect. There's nothing that's quite black and white. Granted, Bobby lost his mind, but you have to look at what he did. People have to look at what he did for chess, and he did some wonderful things. I'm sure my story's going to be worth telling in 20 years (laughs) -- as long as it reflects well on chess. For anyone who plays the game, that's all that matters.