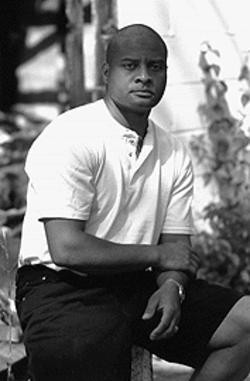 Just three days after Kinloch Mayor Keith Conway was charged with stealing from his city and released on a $25,000 bond, the U.S. Attorney's Office is urging the judge to revoke bond, saying Conway violated the terms of his release.

Namely, Conway was told to avoid all city officials, staffers and other possible witnesses in the case against him -- yet, in a motion filed today, the U.S. Attorney's Office details several interactions in which the mayor did just that within just a few hours of his release.

That activity, prosecutors argue, "reflects [Conway's] utter disdain for this Court and his total disregard" of the terms of his pre-trial release.
Conway had been told not to have any contact with Kinloch employees or government officials, since they are possible witnesses in the case against him. Yet, the U.S. Attorney alleges in its motion that Conway made a series of contacts almost immediately after being released:

* Just after he was read the terms of his pre-trial release, Conway telephoned a member of the Kinloch Board of Alderman, in "direct disobedience of the Court's orders," prosecutors write. In that call, he asked for a key to City Hall.
* After the unnamed alderman refused, Conway and another person drove to his residence and convinced him to give up the key.
* Conway then entered City Hall, spoke with city employees and made multiple copies of city documents
* After writing a cover page, Conway asked the alderman who'd given the key to take a packet of info from him -- and give copies to the other members of the board.

Ironically -- and really stupidly -- among the documents Conway photocopied at City Hall were his bond papers, which include the rule prohibiting contact with government witnesses. D'oh!

But just as bad, potentially, are the documents that Conway asked the unnamed alderman to give to his colleagues. They include a cover page in Conway's own handwriting which appears to lay out his defense. "You approved this because of all my hard work to the city," Conway wrote to the aldermen.

He added, "I have not received any vacation pay for over six years. The money that was spent on vacation was owed to me by City Code 23.190 which you allowed."

As the U.S. Attorney's Office writes in its motion, "His attempt to coach these witnesses as to what they should say relative to the allegations laid out in the Indictment is anything but subtle."

If the judge agrees to revoke Conway's bond, he could be forced to stay in jail until his trial.